Hyundai Goes To Bat For The Mets 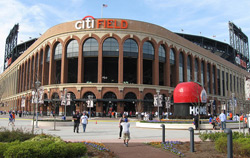 It might be considered something of an automotive Subway Series: While Audi and Toyota have been official vehicle brands of the Yankees since 2009, Hyundai Motor America has just signed a multi-year partnership for naming rights to the Hyundai Club at the Mets’ Citi Field, with a regional push around supporting new car launches in the largest media market in the U.S. (not to mention the largest SUV market.)

Hyundai gets what used to be the Champions Club, a 660-seat premium seating area located on the field level behind home plate, near the dugouts. As part of the deal, the automaker gets signage around the area and a vehicle showcase in front of the club for all 81 games. Hyundai is also in the outfield, as the company bought space there last year. A bonus this year is that the Mets are hosting the All-Star game at Citi Field, meaning the Hyundai name will get national exposure.

Dave O’Brien, senior group manager for Hyundai Motor America’s Northeast sales region, tells Marketing Daily that the sponsorship and exclusive access to the club is funded through the regional ad association. He says Hyundai’s 42 dealers in the New York area put money into a pool matched by Hyundai and overseen by Hyundai Motor’s board of directors. “What has happened is that, because we have done so well, we generate more marketing funds and can branch out to sports marketing,” he says. “Dealers are very excited. It’s a great, high-profile place for us.”

He says the dealer group has not inked a potential advertising partnership with the Mets, or a sponsorship program with specific players, although he said that’s on the table.

The New York region’s 42 dealers constitute 40% of the Northeast region’s volume, which has 170 dealers in 10 states. Only the southern region has a larger footprint, he says, “but the West Coast is coming on strong.”