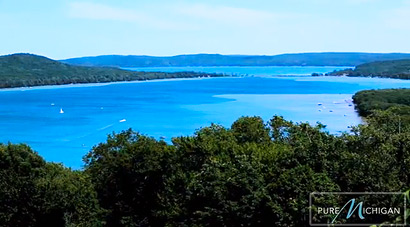 Michigan launched its largest tourism campaign ever this week with a budget of $13 million.

The nationwide “Pure Michigan” campaign will run through the end of June and includes five private sector partners -- the cities of Ann Arbor, Grand Rapids, Traverse City as well as Mackinac Island and The Henry Ford (Museum.) The five national partners contributed $3 million toward the nationwide campaign.

As part of this partnership, television spots featuring Ann Arbor, Grand Rapids, Mackinac Island, The Henry Ford and Traverse City will be included in the national advertising rotation. All partnership advertising also includes the Pure Michigan brand identity, a featured Web presence on michigan.org and support for public relations and social media efforts.

Featured ads in the rotation can be viewed on the Pure Michigan YouTube channel.

In addition to the start of the national advertising campaign, a new Pure Michigan summer video series features six popular warm weather activities and attractions in Michigan including biking, golfing, fishing, wineries, lighthouses and sand dunes. These summer videos are available on michigan.org and the Pure Michigan YouTube channel.

McCann Erickson in Birmingham, Mich. has developed the strategy and creative for the Pure Michigan campaign since 2006.

"We are excited to be back on airwaves telling people across the country that their perfect summer vacation can be found right here in Michigan," said George Zimmermann, vice president of Travel Michigan, in a release. "With the support of our national partners, we are kicking off Michigan's largest national advertising campaign to date and working to build on our record-breaking year for tourism in 2012."