Effie Awards Lines Up The Winners 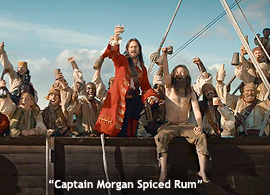 The Effie Awards are back. While organizers have revealed the winners for 2013’s battle royale, they haven’t announced -- nor will they for about two months -- which of them get bronze, silver or gold. That will be revealed officially at the 2013 North American Effie Awards on May 22 in New York at the 45th Annual Effie Awards Gala at Cipriani.

It'll be a long night, as over 80 brands and 60 agencies will receive North American Effie Awards. Fifty categories, including the specialty Health, GoodWorks and Media Awards, and the Global and Shopper Effie competitions will get the nod.

The multiple winners include Procter & Gamble, Kimberly-Clark, Mondelez and Mizuno. On the agency side, there's BBDO, Draftfcb, Ogilvy, McKinney, CP+B and Wieden+Kennedy. Among agencies getting their first statue: Walrus, Silver + Partners, The Terri & Sandy Solution, and NCompass International.

When the Gold, Silver and Bronze statues are off the table, Effie Worldwide will announce the 2013 North American Effie Effectiveness Index rankings, a total­-points roundup of both winners and finalists.

Here are some of the winners vying for top-of-the-podium status in their categories: In  Automotive, Cadillac (nod to Joel Ewanick, ex of GM) for the "Cadillac ATS vs The World" campaign via Fallon and Carat, and Chevrolet’s "Firsts" campaign for the Sonic car, via Goodby, Silverstein and Partners. Ford is a winner for the "Unleashing America's Inner Mustang" by Team Detroit. Rounding out autos is Subaru's "First Car Story” by Carmichael Lynch and 7th Sense Research.

For the Renaissance category, Captain Morgan wins for "Finding the Buried Treasure: The return of Captain Morgan,” via Anomaly, Carat and Taylor Strategy. Depend will be on the podium for “Great American Try-On” by O&M, Organic, Marina Maher and Mindshare. M&M's wins for "Not Your Average Chocolate,” via BBDO, Weber Shandwick, Starcom, Digitas and Thomas J. Paul, Inc.

For Brand Experience we have American Express for “Small Business Saturday,” via Digitas and CP+B; Call of Duty’s “Call of Duty:XP” by NCompass International, Midnight Oil Creative, PMK-BNC, Ant Farm and Sapient Nitro. Oreo wins for the “Daily Twist” campaign, via Draftfcb, 360i, Weber Shandwick, and Starcom. And there’s more, much more! You still have two months to get your tux cleaned.