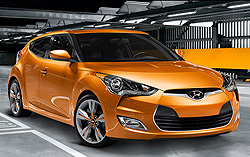 Remember back in the pleistocene when young people would want anything but the Detroit-made car their parents were driving? If you do, you probably own a Honda or Toyota, or a VW Beetle and not the redesigned one. Well, it’s turnaround time: young people are shifting to American brands, and Japanese brands are, at least for the moment, passé. Oh, and Korean brands are also cars of choice for people in their 20’s and 30’s. Especially Korean brands. And European brands are taking some, too. So, basically, Detroit, Seoul, and Frankfurt seem to be sharing Tokyo’s lunch, for the moment, anyway.

Online auto shopping and research company Edmunds.com, analyzing new car retail registrations from R. L. Polk & Co., says American brands accounted for 36.8% of vehicles bought by Americans age 25 to 34 last year, up from 35.4% percent in 2008. The Japanese brand’s share of that market has fallen from 50.6% to 42.9% during that period.

And Edmunds.com found that the exodus from Japanese cars by young buyers is turning mostly toward South Korean brands, which grabbed 10% of new cars purchased by 25-to-34 year olds last year, which is double how it did in 2008.

Jeremy Anwyl, president of Edmunds.com, says some of this has to do with the aggressive credit deals Korean brands are offering. “Credit has been coming a lot more liberally available in the past year, and banks have been getting more aggressive,” he says.

If aggressive credit offers work to lure younger buyers (at some risk, as Mitsubishi’s story indicates) aggressive ads and obviously superficial partnerships won’t. “[younger buyers] are  bombarded with ads; it’s overwhelming younger consumers, and they have a healthy resistance.”

As for Japanese brands -- which were back in a big way last year and so far in 2013 --  part of the challenge is that younger people reflexively turn from whatever their parents drive. “If you go back in history, younger buyers are always different from their parents.”