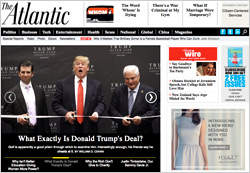 The Atlantic Gets Video From NowThisNews

The Atlantic has partnered with NowThis News, a Web start-up that produces short-form videos about current events and related topics, according to Poynter. The partnership will give The Atlantic Web site access to two to three videos specifically produced by NowThis to help illustrate its stories.

Recent examples include a video produced to accompany an article about bullying, which ran in March, and a video about the history of Jordan, which accompanies an article about the nation's King Abdullah, published in the April issue. All videos produced by NowThis are designed to be accessible via a range of mobile devices. Currently, the partnership doesn’t involve an advertising component.

The Atlantic has been introducing new digital products and formats at a furious pace in recent months. In December it unveiled a new Web site for its corporate brand, with the goal of better highlighting its digital properties, including Quartz and The Atlantic Wire, as well as the digital presence of The Atlantic magazine and National Journal.

The company’s brands are showcased with a selection of stories presented in picture-tile format. Also included in the makeover is a new logo that reworks the “compass” in an eye-catching way.

The Atlantic’s earlier digital initiatives appear to be paying off. The company announced that digital advertising revenue increased 32% in 2012 compared to the previous year, and now makes up over half (59%) of its total advertising revenues. Its events business -- AtlanticLive, which produces events like the Aspen Ideas Festival and the Washington Ideas Forum -- posted a 24% increase in revenues compared to the previous year. 2012 marked the third year in a row of profitability for the company overall.

Southern Living has appointed two new chefs to help guide the magazine’s food coverage. Robby Melvin, a native of Birmingham, is joining the magazine as test kitchen director, with responsibilities for overseeing the brand’s test kitchen staff, which creates and tests 5,000 recipes annually. He previously owned Salt Fine Catering in Birmingham. He also taught at Culinard, the Culinary Institute of Virginia College.

Whitney Wright has been named deputy food director, where she will be responsible for packaging, editing, and writing food stories, developing recipes, food styling, and blogging, among other things. She previously served as senior editor and site merchandising manager for Gilt Home and Gilt Taste.

Meredith Corp. is expanding the reach of its brands in Turkey and Italy. In Turkey, Meredith is partnering with a local publisher based in Istanbul, Dinosaurs Yayincilik ve Dijital Medya Ltd., to launch local editions of Better Homes and Gardens, Parents and More. All three will be published under license in the Turkish language, with distribution planned via subscriptions and newsstands throughout the country. In Italy, Meredith’s Allrecipes.com brand has launched Allrecipes.it, a localized site focused on the Italian market.

Paul Caine is leaving his previous position as chief revenue officer at Time Inc. and taking up a now post as CEO of Dial Global, which provides syndicated audio content to broadcast and digital radio outlets. Caine’s appointment is effective April 5. In his new role, he will be responsible for leading a variety of expansion efforts, including branching out into new audio content and distribution categories, and creating new monetization opportunities for national advertisers via integrated sponsorships.

According to the company, one especially promising area for new initiatives is its sports and entertainment content, which includes NFL prime-time games, the NCAA Men’s Basketball Tournament, CBS Radio News, NBC News Radio, the NBC Sports Radio Network, and the Grammys.