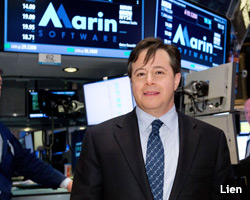 The company raised $105.7 million in total funding, closing 2012 with $59.6 million in revenue, gaining 65% year-over-year by managing $4.7 billion in annualized ad spend for the 531 advertisers it supports worldwide. Last year, Marin opened offices in Japan and Australia, and now supports clients from 13 offices in nine countries.

With 15 consecutive quarters of growth, Marin priced the IPO at $14 per share, above the expected $11 to $13 per share. It traded up to $19 and then stabilized in the mid teens. The size of the offering also increased.

Although Marin isn't profitable today, the nearer-term potential opportunity for the company, and its future shareholders, will come from support for the bigger company, Pivotal Research Analyst Brian Wieser wrote in a research note.

"We lose money because we're investing heavily in growth," said Marin CEO Chris Lien, shortly after the company began trading on the NYSE. "It takes about a year to recoup the money spent to acquire each customer. By growing at such a high rate we incur operating losses right now, but we will grow out of that by 2015. By that time we'll be at cash-flow break even."

Ringing the opening bell to open trading, Lien called it "a neat moment" that crystallizes the company's progress after building the company for seven years. "It was a lot of adrenaline and excitement, but we do view it as the next step in the company's development," he said.

When asked whether this changes his daily role at Marin, Lien said he will devote a certain amount of time to investors, but Marin has been operating as a public company for the past year, so he doesn't expect many changes in operations. Employees now must be more careful of what they say in public where it relates to the company.

When asked to name the most important tactic marketers should focus on this year, Lien said to "fully exploit opportunities" in mobile for smartphones and tablets.