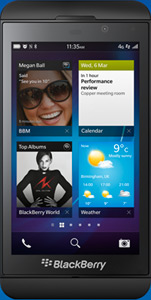 With the BlackBerry launching its Z10 smartphone in the U.S. Friday, the phone maker faces an uphill battle going up against Android and iOS in this crucial market.

BlackBerry had just 5.9% of the smartphone OS market in the U.S. in January, a distant third behind Android (52.3%) and iOS (37.8%), per comScore data. When it comes to U.S. market share among smartphone manufacturers, BlackBerry didn’t even make the top five.

Whether the Z10, launched two months ago internationally, can help reverse the company’s downward spiral in the U.S. is an open question. But one of the factors BlackBerry can’t fight is the bring-your-own-device (BYOD) trend, with more companies allowing employees to bring their personal smartphones into the workplace.

That has opened the door to the iPhone and Android devices, while breaking BlackBerry’s tight grip on the enterprise market in recent years. A new study by Cisco Systems released today finds that 90% of full-time American workers use their personal smartphones for work-related purposes. Of these, 92% access their smartphones for work weekly, and 62% at least daily.

The high proportion of BYOD workers cuts across industry: banking (83.3%), education (95.2%), health care (88.6%), legal (78.6%), and technology (90.4%). However, nearly four out of 10 don’t lock their device with a password. Among Android users, 46% didn’t password-protect their phones, compared to 34% of iOS users. BlackBerry, of course, has long counted security as one of its core strengths, stemming from its traditional focus on the corporate market.

With Samsung promoting its wildly successful Galaxy smartphones as workplace devices, BlackBerry CEO Thorstein Heins touted the company’s “top-notch platinum” security in an interview Friday with CNet. He also took a shot at Android -- the platform that runs on Samsung’s Galaxy phones -- suggesting the open-source system is vulnerable to attacks including malware.

With the Z10, BlackBerry wants to offer the best of both worlds -- consumer-friendly features like a touchscreen keyboard, large screen and slick camera, along with reliable security. If it can pull that off, it would have a chance to capitalize on the BYOD opportunity instead of being crushed by it.

Symbolizing that dual goal is the BlackBerry Balance feature in the Z10, which allows corporate and personal data to be partitioned on the same handset. Can it pull off that balancing act to reignite consumer interest? “I think there’s always a possibility. It’s stronger now than it has been before,” said Ramon Llamas, research manager, mobile phones at IDC.

The Z10 has generally been well-received by tech reviewers to date, but Llamas said the company has to do more to change the perception of the BlackBerry as an outmoded corporate messaging device.

To that end, BlackBerry is promising its largest-ever marketing campaign for the Z10 and the keyboard-equipped counterpart Q10, which will arrive in the U.S. in the coming months. An initial Super Bowl ad the company ran for the Z10 drew a mixed response, using its 30-second spot to show “what it can’t do” through a series of whimsical vignettes. Expect BlackBerry to focus on what the phone can do during an extended campaign.