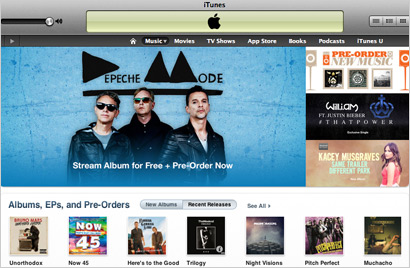 Not everyone associates Apple with online entertainment, but new data shows that its iTunes property is second only to YouTube in the category.

The music-cum-media content hub attracted nearly 45 million unique U.S. Web users in January -- each of whom, on average, spent over an hour on the platform during the month, per Nielsen.

And popularity pays. Set to turn 10 years old next month, iTunes now takes in around $2 billion a year, according to fresh estimates from Asymco analyst Horace Dediu.

“Although cost of content sales are likely to have been preserved as a ratio (about 30%), the vastness of transaction volume (estimated at 23 billion item transactions in 2012 alone) implies that there are some significant economies of scale,” Dediu said of iTunes in a Friday blog post.

Surprising to some might be the fact that IMDb.com now ranks as the fifth most popular entertainment site online. The Amazon-owned database of all things movie-, TV-, and video game-related drew almost 30 million unique users in January -- although each, on average, spent a modest 17 minutes on the site.

Comcast Digital Entertainment sites -- which does not include NBC Universal Web properties or Hulu -- ranked as the third-most-popular entertainment network in January. According to Nielsen, it was responsible for nearly 34 million unique users, who, on average, spent nearly an hour on the network in January.

Long Yahoo’s star asset, its Sports sites ranked fourth among all entertainment properties in January. This was thanks to an audience of about 32.5 million uniques users, according to Nielsen. Hasty score-checkers, however, drove down the network’s time-spent average to about 18 minutes for the month.

ESPN, however, did a far better job holding fans’ attention -- considering they spent an average of about an hour on the network in January -- while, on average, visitors spent just 10 minutes with Fox’s property.