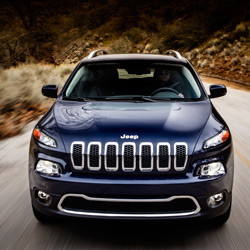 Several automakers have held off showing redesigned versions of their top sellers so far this year. Many, like Toyota, will reveal the new vehicles on stages at the Jacob Javits Convention Center this week. The New York International Auto Show, which opens to the public on Friday, may lack the traditional significance of the North American International Auto Show in Detroit, but it gets a lot more people and it's in the heart of the country's top SUV market.

The Detroit show had 59 introductions, 5,200 or so journalists, and 795,416 attendees. The New York show last year had 62 intros, and 7,398 press registrations and organizers predict it will get north of a million visitors during the course of the show’s 10-day run. It also helps that New York is Grand Central for media players.

Given the concentration for crossovers in this region, it’s no surprise Toyota is using the show to unveil its redesigned Highlander SUV, a vehicle that accounted for about 121,000 vehicles sold last year, about a 20% increase over 2011. In the small sports car area -- which will have some play at this year’s show as well -- Toyota's Scion division will use New York to unveil the new 2014 Scion tC sports coupe.

Chrysler Group, whose Jeep division most recently showed the Grand Cherokee in Detroit this year, will move into Javits with the Durango three-row SUV, which is built off the same production platform as the Grand Cherokee.

Acura will also show an SUV: the 2014 MDX, the seven-passenger that was hinted at with a pre-production model in Detroit. Meanwhile, Jeep will show the return of the Cherokee, the vehicle that predates the Grand version. And Nissan will show the first hybrid version of its Pathfinder SUV.

Honda, meanwhile, will show the latest version of the Odyssey minivan that has, at various points, been harder to get than a pre-reveal iPhone, and has tended to have the highest resale value in the soccer mom segment. It’s just that the reveal is here, given the demand for minivans in the northeast region.

Buick, which is putting a lot more emphasis on smaller SUVs and cars, showed the Encore compact crossover in Detroit in January and  this week unveiled the  refreshed 2014 LaCrosse sedan ahead of the New York show.

Chevrolet will show its 2014 Camaro SS, and, by extension, the revivification of the SS performance brand. The automaker says the new Camaro is the "most significant" redesign of the Camaro, which is in its fifth generation, believe it or not.

GM's Cadillac division will unveil its most important sedan, the CTS. Actually there was either a stealth reveal pretending to be unintentional to tease the vehicle and build buzz, or a truly unintentional reveal online. The car, which goes on sale this fall, is Cadillac's missile against Mercedes-Benz E Class car, the Audi A5, BMW's 5-series.

Other launches include the U.S. reveal Volkswagen’s new Golf; an Mercedes-Benz’ AMG version of the new CLA sedan that was first advertised during this year’s Super Bowl; a trio of concepts from BMW.