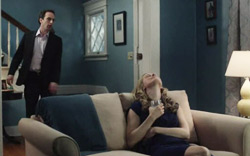 Pepperidge Farm is spoofing addiction to its Milano cookies with a new television campaign dubbed “My Yummy Secret.”

The first 30-second spot in the campaign, from Y&R NYC and directed by David Shane, features a husband reminding his wife -- who is shown holding a glass, relaxing in the living room -- that they are scheduled to go to dinner in 30 minutes.

Husband: “How many have you had?” Wife: “I don’t know -- a few.” Husband: “Right before dinner, huh?” Wife: “I’m spending the evening with your boss’s wife, so this is the highlight of my night. You want one?”

As the husband (played by Peter Grosz, who’s also a regular in Sonic Drive-In commercials) gives in to her invitation, it turns out that what she has really been secretly relishing -- previously out of the camera frame -- is a box of Milano Cookies. Both proceed to enjoy their guilty pleasure.

The spot can be viewed on YouTube or Milano Cookies’ Facebook page (currently showing nearly 404,000 “likes”). It debuted on last week’s season premiere of ABC’s “Dancing With the Stars” and episodes of CBS’s “2 Broke Girls” and “Hawaii Five-O.” It’s also been airing heavily on major cable stations.

The ad will run through May, with a second spot slated to air later this year.

Suzanne Goodrich, business director of cookies for Pepperidge Farm, notes that the campaign lightheartedly showcases the “strong emotional connection” that consumers have with Milano and an existing behavior: Consumers, mostly women, have been telling Milano for years that they enjoy the cookies during special “me time” occasions.

“We found that many women hide their Milano cookies, keeping them all for themselves,” added James Caporimo, executive creator director, Y&R NYC. “So the idea of a misdirect…seemed perfect. It brings a modern twist to a great brand.”

“Milano is by far our most popular cookie, and we are making a serious investment to support our iconic brands and remain relevant to today’s consumers,” stressed Goodrich.

Milano has also redesigned its packaging, and is updating its portfolio. The brand recently launched Milano Slices, and has introduced new flavors such as Boston Cream Pie Milano Melts.