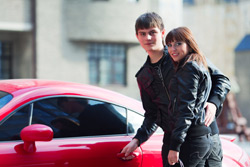 Finbarr O'Neill, president of of J.D. Power and Associates, is betting on the U.S. car market, although from the global perspective, the U.S. will be far behind China -- a huge switch. O'Neill, speaking at J.D. Power’s 2013 Automotive Forum in New York on Tuesday, pointed out that in 2007, the U.S. had more auto sales than any other country, while China was a distant second. By 2017, prognosticators say, 30 million new-vehicle sales will be happening in China, with the U.S. constituting 17 million units.

Still, we are looking at a good year for the sector. The drivers: credit expansion is giving people entrance to the car market as lenders loosen constraints; automakers are exercising a lot better pricing discipline, holding incentives down and enjoying higher per-vehicle transaction prices, meaning higher grosses for dealers and manufacturers; the U.S. fleet is 10 years old or more, which means automakers are going to enjoy pent-up demand this year. That is good news as they are rolling out a raft of new cars and trucks this year; in general there's a consumer-recovery, better-capacity picture. "Its virtuous cycle over the next few years should mean a strong industry," he says.

One sign of showroom traffic to come is the average age of cars on the road. O'Neill cited R.L. Polk stats that puts the average age at 11 years, the oldest fleet age since World War II. "Cars are getting better, and the economy makes people hold them longer -- but," he added, "there is also lots of pent-up demand to feed this year's introduction of 51 new or major redesigned vehicles hitting the market."

He also noted that sheer volume is meaningless if it doesn't reflect retail. "The  most important number is always retail because that's the consumer buying cars," he said. In 2005, he noted, people were crowing about our 17-million-unit market. But almost 4 million of that was commercial fleet and daily rental. "Now you see retail coming back, with daily rental still in control." Of course, some brands are putting more vehicles into fleet than others, and those who are [doing so] need to worry. When you are getting over 15% of sales in fleet you ask, 'How strong is that brand?'"

On the retail side, there are fewer stores -- 17,500 versus about 20,000 in 2009. "But it's a healthier distribution channel," he said. And more consumers can get back into the market because financing has gotten a lot easier as well, he notes -- pointing out that lease penetration, which was recently at 13%, is now up to 23%. "Not just in luxury [which is traditionally lease driven] but throughout non-premium." As automakers have become more disciplined, he notes, incentives are down to $2,790 -- which is essentially flat for three or four years -- while transaction price has gone up about $3,500.

But the "bubble" generation of Gen Yers are a lot less loyal and a lot more demanding. Back in 2005, they were less than 10% of buyers; now they are about a quarter of buyers, while Gen X is about the same, meaning about half of all buyers are not Boomers. Dealers must adjust. "These buyers have different expectations for dealership experience, pricing and packaging. Their tolerance is much lower." They are also far less apt than Boomers to take a vehicle back to the dealership at which they bought it for routine service.