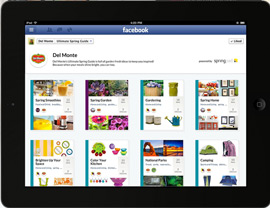 Springpad today released the latest version of its productivity app, allowing brands and publishers for the first time to create their own customized presence in the app.

Among the 15 initial partners using Springpad’s embedded Notebooks -- which can be extended to their own Web sites or blogs -- are Glamour, TripAdvisor, Snooth, Del Monte, Breville and Wayfair.

The new image-centric pages for brands are an outgrowth of the digital Notebooks for individual users in Springpad that let people save Web pages, photos, articles, audio files and other content in one place.

Consumers can opt to “follow” a brand’s Notebook on the desktop or mobile device and get alerts when the page is updated. They can also share Notebook content through Facebook and other social media.

Launched in 2008, the app has evolved from an Evernote competitor to a more visually oriented organizer and personal assistant. Among recent additions is a “live objects” functionality that builds context around saved content. If you save a movie you want to see, for example, Springpad will pull in related material such as a RottenTomatoes rating, YouTube trailer or local showtimes.

“This is the key differentiator that will propel us into the digital assistant era,” said Springpad co-founder and CEO Jeff Chow. We understand the meaning of information saved. That’s the technology we’re now giving to publishers and brands.”

Given the Pinterest-like look and feel of Notebooks, why would a brand expand to Springpad, which has 4 million users compared to Pinterest’s 25 million members? Chow suggests Notebooks go beyond images to offer a range of information from how-to videos to recipes to travel tips.

Sarah Rotman Epps, a senior analyst at Forrester, says Springpad does offer some some unique technology like the ability to generate context around users’ saved content. But by combining elements of other apps or sites from Evernote to Pinterest to Twitter it may sacrifice its own identity.

“The problem with marketing their product is that it’s so flexible that it’s hard to communicate what that key use is that consumers will adopt it for,” she said. Epps pointed to Easilydo as an app that is more of a straightforward virtual assistant, for instance.

If bringing on brands makes Springpad less of a pure utility, it also represents a move to further monetize the app. The company’s co-founder and head of business development Jeff Janer said it plans to establish a revenue-sharing arrangement with publishers and have a fee-based software-as-a-service model for brands.

Publishers will be able to offer sponsored Notebooks. Glamour, which has a Notebook dedicated to beauty tips, for example, might have Maybelline sponsor that page. “So it’s ultimately a brand opportunity and a publisher can package that as part of their ad sale,” said Janer.

The updated Springpad app is available today for iOS (iPhone and iPad) and Android devices as well as on the Web.