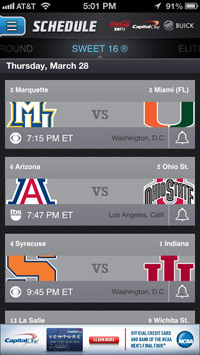 March is not only mad -- now it's very mobile. Given the proliferation of smartphones and higher-speed access to them in the last year, it is to be expected that accessing March Madness video coverage on devices would grow considerably. But as with all things mobile, early results exceed even those high expectations. According to the NCAA, 2.6 million unique visitors watched live video in one of its apps in just the first week of March Madness. This represents a 121% growth in audience for live video over 2012, which saw 1.2 million viewers.

In its first weekend, the NCAA March Madness Live app in both the Google Play Store and the Apple app stores rocketed to the top of the sports and free app charts. And it is interesting that the share of total live video served increased on mobile devices day by day. For instance, on opening day of Thursday, the share of video viewed on mobile devices was 43% of live video streams. The next day (Friday) saw 48% of video streams coming to tablets or smartphones. By Saturday, it was up to 59%, and by Sunday, 60%.

Mobile usage usually spikes on weekends anyway, as people tend to be away from their desktop computers. But in this case the growth might also be chalked up to increased awareness of the app’s mobile TV viewing capabilities through onscreen mentions, online mentions, and enhanced presence in various app stores. Users were being pushed to the NCAA March Madness site from CBS Sports as well as bleacherreport.com.

Still, it is interesting that the time spent per user viewing live video on devices continued to trail the time spent with video via broadband. In the opening week of the tournament, 105 minutes of live video was consumed per user from broadband connections, and 61 minutes of video was viewed on devices per user. But the amount of video going to smartphones in particular was up 42% over the time spent in 2012. This suggests that higher-speed mobile data networks as well as the larger screens on most of the high-end smartphones are encouraging people to watch more video longer on handsets. The share of viewing minutes on mobile also grew across the first four days from 23% on Thursday incrementally up to 32% of all viewing minutes of video on Sunday.

The NCAA reported that overall its March Madness live video offering served 36.6 million streams in its first week -- double the number of streams for the entire tournament that it served last year.