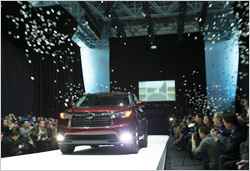 Toyota has nine new or updated products coming this year, a new organizational structure and some good news about consumer confidence -- and not just for the U.S. economy. In the first two months this year the automaker's three divisions -- Lexus, Scion and Toyota -- sold something like 324,000 vehicles in the U.S., according to Robert Carter, SVP of auto operations at Toyota Motor Sales, U.S.A (TMS), who spoke at the NADA (National Automobile Dealers Association) and J.D. Power Auto Forum in New York earlier this week

In addition to sales outlook and new vehicles, he talked about the executive changes at TMS announced on March 6 -- part of a plan initiated in 2011 to unify operations at the global regions -- but also to give those regions autonomy in terms of product development and marketing. "It was always [President of Toyota Motor] Akio Toyoda's plan to give more autonomy that allowed for products tailored to individual markets. It's not just a new-team management shuffles. It's a huge turning point for the company," said Carter.

Another turning point is the promotion of several non-Japanese executives to lead divisions and regions. Jim Press, in 2006, was the first non-Japanese to achieve that, becoming president of what was then called Toyota Motors North America. "In the past, critics have said Toyota's global efforts have been hampered by not bringing in non-Japanese," said Carter. Well, for the first time in its 76-year history, Toyota has appointed three such people to top roles. Mark Hogan, previous group VP of GM and Magna international, who had also been the chief at the joint-venture NUMMI plant in Freemont, Calif. (that built both the Toyota Matrix and Pontiac Vibe), will sit on the Toyota Board. That's another first: Toyota had never before tapped someone from outside the company for the board.

Jim Lentz will be CEO of Toyota North America, also a first in its own way. "This is the very first time a single leader has both operational and earnings responsibility for the entire market," said Carter. "I told Jim he has so many titles now that his business cards will be size of a poster," he joked. Also, he noted, four of eight global regions will now be led by non-Japanese.

And Mark Templin will be the first non-Japanese to oversee Lexus' global operations at headquarters in Tokyo. As for Carter, he now oversees the sales, service, marketing, vehicle distribution and parts operations for all three divisions. "My responsibility is to make sure  those areas work together. I think Toyota is now thinking and acting as a global company to help us make even faster decisions to to suit customers in local markets. That's what it's about: our customers and our ability to better serve them."

He said the new iteration of the Avalon large sedan demonstrates how the new North American arrangement will create totally regional vehicles on global platforms. "That was designed at [Toyota’s Newport Beach, Calif., design center] Calty, engineered in [Toyota’s engineering center in] Ann Arbor and built in Kentucky.  Since it hit the market in December, the only problem is we can't build enough. There will be more cars styled for the U.S." What he'd like love to see, he said, is an expansion in trucks and sports cars.

Meanwhile, among the new or redesigned vehicles this year: The 2014 version of the RAV4 compact crossover, introduced in Detroit; the 2014 Tundra, totally redesigned inside and out, with much more aggressive styling; the Lexus IS, the first with Lexus' new subscription-free multimedia system; and the Highlander, which debuts here on Wednesday along with the new Scion tC.