The Whole Story: TV As A Path To Purchase Medium 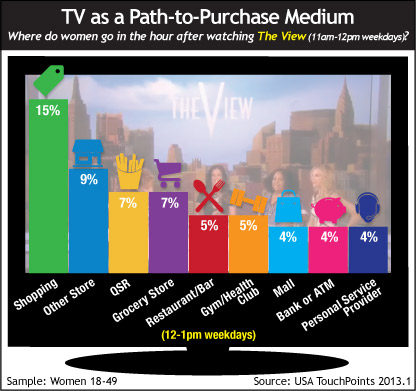 A path-to-purchase medium is typically thought of with regard to its proximity to the time and place when the consumer makes their choice at retail.

As such, TV tends not to be front and center in our minds as a path-to-purchase medium -- perhaps because we mostly focus on prime time. Or, because we think of media such as radio, outdoor, digital place-based and increasingly mobile as being more relevant to reaching consumers close to the time of purchase.

However, when we look at early evening TV, before dining out, going to the movies or socializing, and daytime TV, then we are able to look at TV in a different way: It occupies a different place on the path-to-purchase.

For example, in USA TouchPoints it is possible to align media consumption with location and activity (among other things) before during and after the media exposure itself.

With that in mind, we looked at a prominent daytime broadcast property -- in this case ABC’s "The View" – which occupies a regular and ongoing slot in the schedule. The same could be done for "CBS This Morning," etc.

Looking at women 18-49 who watched ABC during the time the program airs on a weekday, we found that a significant percentage of them then left the home and were in retail locations in the hour immediately following the show.

As indicated in the chart, 15% of the sample were shopping, with 7% visiting a QSR and 5% a Restaurant / Bar – perhaps to meet a friend for lunch. Grocery shopping inevitably features prominently at 7% of the sample, but with Mall and “Other Store” also showing strongly in this first hour after "The View," there is clearly a broader range of shopping taking place.

This analysis does not look at the time beyond the first post-viewing hour, when those in restaurants may continue to shop, as previous analyses have implied.

This simple analysis of USA TouchPoints illustrates the value of key daytime broadcast properties to deliver shoppers with the full combined weight of sight, sound and motion delivered by TV, with a plan and creative oriented toward a point-of-purchase call to action.

Combined with radio to bridge the gap between home and store and perhaps digital place-based or outdoor, it becomes possible to envisage a coherent and consistent campaign that starts, for example, with "The View" and ends at the cash register.

5 comments about "The Whole Story: TV As A Path To Purchase Medium".
Check to receive email when comments are posted.
Read more comments >
Next story loading