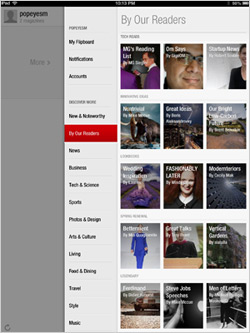 One of the great success stories of the first years of the tablet platform, Flipboard, issued its 2.0 version release yesterday with an eye toward empowering users as editors. To some degree, this has always been the case. After all, Flipboard leverages a user's social graph in order to render much of its well-designed magazine-like content.

But with the new release, the app is now engaging users more directly in the process of making new content. With the touch of a button, the reader can now tag specific articles and build magazines that can be made public for others to see or kept private for their own later use.

In some sense, this takes the Tumblr concept onto the tablet in a compelling format. The visually oriented Flipboard, like Tumblr, encourages people to be public curators and use the image as one of the principal tugs. Likewise, it takes some of that spirit from Pinterest, which many people use as a kind of public bookmarking.

Flipboard itself will be curating some of the best of these magazines and highlighting them on its own platform. While the company doesn't say so in its announcement, this certainly positions them for a new kind of native advertising.

After all, custom publishing is one of the long-standing business models for many magazine companies. And many brands have pages and pages of content strewn across their own sites and social media that could be collected into a magazine format.

Even better, why shouldn't or couldn't a brand build a magazine of curated content from around the Web and offer it up on Flipboard as a part of its brand identity? One wishes that brands did more of this on their own Facebook and Twitter feeds, for instance. In fact, Tumblr seems to be the venue that has encouraged more brands to look farther and wider for content than some of the earlier and bigger social networks.

I asked Flipboard's Marci McCue whether the company is encouraging its brand partners to do exactly this. Her take on the idea suggests the business model that Flipboard has in mind. “Brand marketers can certainly build their own magazines and presence on Flipboard," she tells me. “They can curate lots of different magazines -- from men's shoes to energy drinks. They can promote any of their magazines via social sharing. We have an editorial team always looking for great content, and if there's something cool, they could feature it. But it is more likely brands will use advertising on Flipboard (through publishers on Flipboard) to grow readership to magazines. Any ad can directly link to any magazine. “

Flipboard could have a nice little model there in promoting these magazines in various ways within the apps.