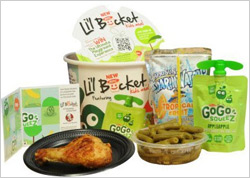 KFC is launching Li’l Bucket Kids Meals, packaged in a kid-friendly version of KFC’s adult bucket. The launch is being supported by social and other promotions.

The standard meal has 210 calories, four grams of fat and 565 mg of sodium, according to KFC. A meal can also be customized with other chicken choices (a Crispy Tender or chicken sandwich or “Bites”), other sides (macaroni and cheese or mashed potatoes with gravy instead of green beans) and drink options (including milk). New, graphics-heavy, child-level menu boards list the lowest-calorie choices first.

KFC (and sister Yum Brands chains Pizza Hut and Taco Bell) are not participants in the National Restaurant Association’s “Kids LiveWell” nutrition standards program, according to Nation’s Restaurant News. However, a report on kids’ meals nutritional content just released by the Center for Science in the Public Interest found that KFC already offered at least some kids’ meal combinations that meet the Kids LiveWell nutrition standards, which (except for calorie maximum) are similar to standards developed for CSPI.

Through partnerships with other brands, the Li’l Buckets will feature activities for kids throughout 2013, starting with word puzzles and riddles from GoGo squeeZ.

KFC has been promoting the new kids’ meal on Twitter (with hashtag #kfckidsmeals). It is also running a social media-based contest and a sweepstakes.

The Li’l Playground Makeover Facebook Contest invites fans to enter for a chance to win a makeover for their local community playground, by submitting photos with a short story. Photo or video entries can also be submitted through Twitter’s Vine application or Instagram by using the hashtag #KFCPlaygrounds. KFC will choose up to five winners for the playground makeover prizes, plus Li'l Buckets kids' meals to cater a neighborhood block party at the new playgrounds.

Fans may also enter the KFC Ultimate Playground Experience Sweepstakes, running through April 30, by scanning the QR code on a Li’l Bucket or visiting www.kfc.com/lilbucket. Prizes include funds to cater a KFC block party or an appearance from the GoGo squeeZ Mobile Playground.