March Madness Is Gladness For Detroit 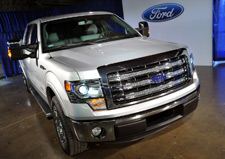 Sequester, broken Congress, taxes hikes be damned -- March was a great month for the domestic automakers, reporting their best sales in five years or more.

Michelle Krebs, senior analyst a Edmunds.com, said March continues a trajectory that started a year after the recession, with pent-up demand, good credit offers, and a boatload of new products this year and last. "The story is the same as it has been: pent-up demand from old vehicles on the road is unleashing, credit is readily available at cheap rates and to a wider array of consumers, and new products are resonating with consumers."

The General reported its best auto sales numbers in half a decade --  selling 245,950 cars and trucks and marking a 6% increase versus the month last year. Retail sales were up 4%, and fleet sales -- not the ideal destination --  were up 12% and 27% of the total. Cadillac, in the midst of an agency review, was up almost 50%; and Buick was up 37%. Chevrolet, GM's largest division, was flat with last year.

Ford, GM and Chrysler all posted big full-size pickup truck sales: Chrysler's Ram Truck division saw the strongest of any of the automaker's four brands, with a 24% increase versus last March; Ford's F-Series pickup marked its 20th month in a row of sales increases, with its best March and first-quarter sales performance since 2007; GM posted a 21% increase in large pickup sales, and its GMC truck and SUV division was up 12%. Both GM and Ford reported double-digit increases in their truck sales. Housing starts drive truck sales, so by proxy it was a good month for houses too.

Overall, Ford saw a 6% increase in sales, its best since 2007. Fusion and Escape hit all-time sales records for the month, with the former reaching 30,284 vehicles sold, and 80,558 during the first quarter. For the latter, Ford sold 28,934 Escapes, a 28% increase versus year-ago. The company sold 33% more Explorers versus last year and said Explorer got its best monthly sales numbers since the current model was introduced in 2010.

Dodge, Ram and Fiat all posted improvements for the month versus last year. All told, the automaker moved 171,606 units, a 5% increase compared with the month last year. And yes, it was the best sales month since 2007 for Chrysler, too. The icing on the cake: it was Chrysler Group's 36th consecutive month of sales gains. The company says that the stat beats the 35 straight months it got back in 1994.

Looking at the industry at large, per-vehicle profits also look really good for March, if TrueCar estimates hold water. The online shopping and research reported that the average transaction price for light vehicles last month was $31,087, a $339 -- or 1.1% increase -- from the month last year. Jesse Toprak, head of industry analysis at TrueCar, said transaction numbers (everything you shove over the dealership counter, including incentives, financing perks, and after-market bolt-ons) are up because consumers are willing to pay more for higher trim-levels.