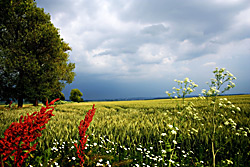 Thanks to extreme weather patterns, experts are predicting that the coming allergy season will be both long and intense, and drug chains like RiteAid and CVS are already targeting the sneezing masses.

Rite Aid, for example, says it is offering free allergy health screenings nationwide, with its pharmacists providing personalized allergy tips, to make it easier for consumers to choose among the wide range of over-the-counter options. (The chain says best results occur when consumers begin treating symptoms two weeks prior to their occurrence.)

Screenings will include tests for such allergens as ragweed, grass, mold, wheat, dust mite, egg, milk and cats.

And CVS has its allergy microsite up, which allows users to enter their zip code for local pollen counts.

"Severe weather patterns can bring higher temperatures, higher pollen levels and increased exposure to outdoor mold, resulting in spring allergies that can peak stronger and last longer," says Bill Berger, MD, Allergy and Asthma Associates of Southern California, in the Asthma and Allergy Foundation of America’s release on the looming allergy season. (The group just released its 11th annual ranking of the most pollen-pounded places, sponsored by Dymista, a seasonal allergy spray.)

It says spring now arrives 10 to 14 days earlier than it did just 20 years ago, bringing with it increased pollen counts. Overall, 15 of the top 25 cities on this year's ranking are in the South, led by Jackson, Miss.; Knoxville, Tenn., and Chattanooga, Tenn.

But the group predicts that the Northern cities of Buffalo, N,Y.;  Springfield, Mass.; Richmond, Va.;  Detroit, and Toledo, Ohio will have increasingly challenging allergy seasons.

Meanwhile, Walgreens says it is expanding its Balance Rewards Program, allowing its 60 million members to earn more points for healthy behavior. In addition to walking, which already gave members 10 points per mile, participants can now earn rewards through running, goal setting and tracking their weight, as well as filling prescriptions, getting vaccines, and sharing badges in social media. (In addition to using its mobile app, members can also use such devices as Fitbit.)