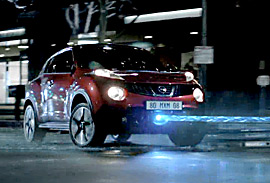 Europe loves the Juke. Nissan's ad operations across the pond have used the car to do things like race in Dubai against some young sheik's bevy of supercars. The latest is a campaign via TBWA\G1 and Nissan Europe that plays on the car's attitude in an urban jungle.

The effort, “Urban Thrill Rides,” comprises TV, print, outdoor and will be supported in retail and digital, and will run in more than 20 European countries starting in April, per the automaker. The TV campaign has a GPS route guidance turn into a literal tether attached to the front of the Juke. The glowing rope pulls the car through the city, making it do all kinds of skateboard moves as it heads toward the red pin.

Juke has never been a real blockbuster in the U.S. Last month Nissan posted its best month ever for North America, at 137,726. The company sold 15,381 of its bigger Rogue compact crossovers, which actually represented a 9.4% drop. But the company only sold 3,916 of the compact crossover Jukes, a 6% drop. The pure-electric Leaf car reached over 50% of those numbers. Nissan sold over 9,000 Jukes in Europe in January, though. And Nissan reported selling 140,000 of the cars in Europe last year, making it Nissan’s best-selling compact crossover vehicle.

In Europe, where the compact sports crossover was a hit when it launched in 2011, Nissan has done a lot to position Juke as a performance lover's car. The company introduced the Nismo (Nissan Motor Sports) version this year, and brought it to the U.S. in March, the first part of a renaissance here of the Nismo sub-brand. Nissan introduced another performance variant of the Juke -- under the sub-brand, R -- in the Middle East last year.

The company last year put the Juke Nismo and Juke-R in the digital game Asphalt 7: Heat and offered players who "drove" the cars a chance to go to Barcelona and drive the Juke Nismo.