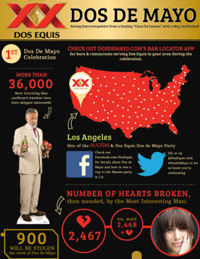 This year, Cinco de Mayo falls on a Sunday -- threatening to perhaps put something of a damper on celebrations and the sales of alcoholic beverages that do big business on the holiday.

Dos Equis is certainly a leading beverage choice on this increasingly popular holiday, and it’s not taking the Sunday timing passively. In fact, the brand decided to create its own, pre-holiday kickoff event, dubbed “Dos de Mayo,” on Thursday, May 2.

Dos Equis launched its promotions for Dos de Mayo by releasing a video message from its famed spokesperson, “The Most Interesting Man in the World.”

In the video, The Most Interesting Man alerts celebrants that Cinco de Mayo falls on Sunday this year, and urges them to “mobilize your friends, your co-workers, your mistresses, your neighbors, everyone” to kick off their celebrations on Dos de Mayo. (He also explains that Sunday doesn’t work for him, personally, as he runs a rattlesnake “charm class” early on Mondays.)

The video is viewable on the brand’s YouTube Channel. There’s also a link to the video on DosdeMayo.com, a site dedicated to providing more information about Dos de Mayo.

The site offers a locator to find nearby bars celebrating the newly minted Dos de Mayo pre-holiday (more than 1,000 nationwide, according to Dos Equis), a Facebook tool for sending official Dos Equis invites to one’s own Dos de Mayo party, and drinks made with Dos Equis, plus festive recipes for the occasion.

In addition, fans 21 and older can enter a sweeps offering chances to win an all-expenses-paid trip for two to Los Angeles to attend the “official” Dos de Mayo bash, co-hosted by Dos Equis and Maxim magazine. (The sweeps info and entry form are on a co-branded Maxim/Dos Equis site.)