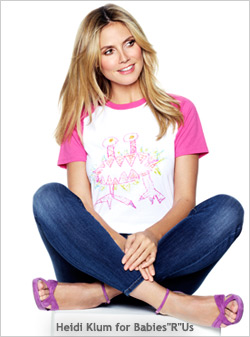 Looks like fashion sense is in the genes: Supermodel Heidi Klum is introducing a line of t-shirts at Babies R Us, all sporting monsters drawn by her 6-year-old son, Johan.

Called Truly Scrumptious by Heidi Klum, the specially designed t-shirts are intended to raise awareness for Save the Children, a longtime charitable partner of the Toys R Us unit. Available in sizes newborn to 5T, the $4.99 shirts are already online, and expected to be in stores next week.

In addition to the Save the Children hangtags, the effort includes in-store links to Project Doodle Contest, which a Babies R Us spokesperson says “builds on Heidi Klum’s mission to help inspire creativity among little ones everywhere, and celebrates this new, kid-designed assortment.”

Kids 8 and under can create doodles using Doodle.ly, a digital sketchpad, and parents can upload them either through the company’s site or Facebook. The public can vote on the designs, with two winners to be featured on t-shirts, and sold this fall as part of Klum’s collection. Prizes include merchandise and gift cards.

As part of the project, Babies R Us donated $50,000 to Save the Children. (Separately, that organization has just launched another celebrity initiative with soccer legend Cristiano Ronaldo, encouraging people to purchase a goat to tackle child hunger in Guatemala.)

Klum, mother of four, has been all over the tabloids recently, after pulling son Henry, 7, out of a dangerous riptide during an Easter holiday in Hawaii. She also rescued two nannies.