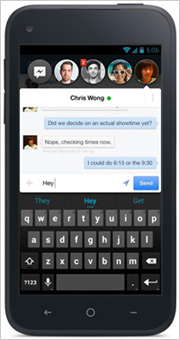 Called Facebook Home, the app runs on top of Google’s Android platform and puts features like the news feed, notifications and messaging on users’ visually focused format that fills the home screen. Android users will be able to download Facebook Home from the Google Play Store starting April 12. HTC will release the first phone with the software built in on the same date.

The move is the latest illustration of Facebook’s self-declared transition to becoming a mobile-first company. With nearly 700 million mobile users and a growing share of its revenue coming from mobile ads, Facebook Home is aimed at further boosting engagement via devices, and in turn expanding its mobile ad push.

Facebook Home's central feature is called cover feed, which replaces the lock screen and the home screen. It provides a photo-centric representation of a user’s news feed, showing status updates, as well as notifications against background images from posts or user profiles.

One of the most intriguing new elements -- chat heads -- allows people to respond to friends’ messages even when they are interacting with other apps. When a message comes in, a small circle with a friend’s face pops up, providing a more visual chat experience. A user can conduct multiple chats, and with SMS built into Facebook Messenger for Android, include Facebook messages as well as texts.

At the press event, Facebook CEO Mark Zuckerberg explained that the new mobile offering is built around the way people use their phones rather than apps. It is designed to let people more easily find out what’s happening with friends and in the news instead of sifting through a series of apps.

Many analysts and observers have noted that Facebook already has, in effect, made every handset a “Facebook phone” through its various mobile properties. In addition to its main apps for Android and iOS, it offers a Messenger app for making free calls to Facebook friends, a Camera app, and Poke, for taking self-destructing photos.

There’s also Facebook Zero, the stripped-down version of its service for mobile users in emerging markets. But with its own twist on Android, Facebook wants to go farther, becoming the starting point on the world’s dominant mobile platform. Android powered 68.8% of smartphones shipped globally in 2012.

“Having a layer on top of Android enables them to be front and center of the consumer experience,” noted mobile industry consultant Chetan Sharma. “FB will always be on the home screen meaning chances of engagement will be high for both content feeds and notifications. This is important for both developing and developed markets.”

Facebook Home will initially be available for download on four smartphone models: the HTC One X, HTC One X+, the Samsung Galaxy S III and Samsung Galaxy Note II. It will also be pre-installed on the new HTC First phone, which will be offered through AT&T and will sell for $99.99. But Zuckerberg indicated that the company is also working with several other carrier and manufacturing partners, including Orange and EE, to bring the software to Android users more widely.

John Dawson, chief telecom analyst at Ovum, noted that the move is also lower-risk than creating its own phone or mobile OS. “If it does turn out to be successful, Facebook can build on the model further and increase the value provided in the application over time,” he said.

If it does gain traction, Facebook Home could help Facebook boost mobile advertising. In the last year, the company’s mobile ad revenue has gone from almost nothing to 23% of its overall revenue. eMarketer projects Facebook this year will earn $1.53 billion in mobile advertising, up from $470.7 million last year.

A more integrated experience on Android offers an opportunity for Facebook to collect more social data to serve up more advertising via mobile, noted Dawson. A Facebook spokesperson said ads will not be included in the initial version of Home, but the company plans to add advertising to subsequent versions.

The main difference from the desktop is that ads will take up the entire screen instead of a segment of the news feed. That opens the door to serving high-impact, display-like ads on a user’s phone, according to a blog post Thursday by 360i. The digital agency also said Facebook Home allows for real-time geotargeting to potentially be enhanced.

As with its apps, Facebook said it will update Home on a monthly basis.