Slugger, Via Social, Seeks Next Crop of Heavy Hitters 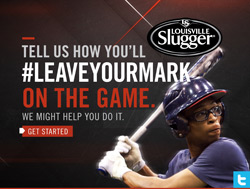 With baseball season underway, Louisville Slugger is out to win over the next generation, in a social-media campaign it hopes will bridge its storied past with tomorrow’s legends.

The effort grew out of research that showed while the brand was well recognized, liked “and in everybody’s consideration set when they went shopping, there were some key gaps in relevance,” explains Kyle Schlegel, VP-marketing at Hillerich & Bradsby. Young players, it turns out, aren’t big on baseball legends. “They don’t know or care who Ted Williams was or what bat he used. It’s just not meaningful to young players.”

And while there was no doubting the brand’s dominance in the big leagues, where it commands about 55% of the market, “we were falling into fourth and fifth place in measures that reflect young players’ use and awareness,” he says, including the number of coaches recommending the brand and elite young players swinging it.

“So the challenge was to find a way to embrace the history and incorporate it into the story of the brand, but make it forward looking,” he tells Marketing Daily. The result is “Leave Your Mark,” created by Me Plus You, which asks players to answer two questions -- explaining who has most left a mark on them, and how they intend to make a mark on the future.

Working on Facebook, Instagram, Pinterest, Twitter and Slugger.com, those who enter have a shot at winning a Posey Model MLB Prime Bat and additional prizes, and Schlegel says the company is pleased with the amount of interest the campaign and contest and have generated so far.

The project also included a new logo for the brand and in the 30 days leading up to Opening Day, it did a takeover of its own site, with a new tile -- showcasing another part of baseball history and revealing a little bit more of the new look. “That brought everyone up to the present day.”

While the brand right now is confined to bats, gloves and gear, Schlegel believes it will expand into a lifestyle brand “within the next three to five years. Currently, fans who tour its factory can buy a wide range of apparel, “and there’s no reason we can’t sell that to a broader audience. Slugger is a trademark people will want to wear day in day out, especially in this younger age group.”

Meantime, the brand doesn’t have much to worry about this year: Schlegel confirms that the average pro goes through 130 bats each season. “Some are broken,” he says. “But players are superstitions, and sometimes they just discard a bat when it gets cold.”