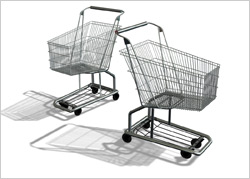 It may only take up to a 20 percent deal to drive a mobile shopper out of a store to purchase online.

Some years ago, I was walking through Sears and came across a couple looking at a Kitchen Aid mixer, with the price prominently displayed. The man pulled out his smartphone, read the barcode and told his partner “it’s cheaper at Best Buy. Let’s go.” And they left Sears, presumably headed to Best Buy.

Out of curiosity, I loaded one of my barcode reader apps and checked the price. Sure enough, it was available at Best Buy for 10 percent less at Sears.

Since that encounter, I’ve continually wondered what it would take to drive a consumer to leave a store to purchase elsewhere or online, AKA the dreaded showrooming.

A new piece of research on coupons this week mentioned in passing that 67 percent of shoppers check their smartphones to see if there’s a better price elsewhere.

Digging deeper into the nationwide study, conducted by Anderson Robbins Research for Linkable Networks, further identifies that there are some hardcore deal seekers, with 13% checking their phones all the time for better deals elsewhere.

A more interesting stat in the study is what it would take for a shopper to leave a store and purchase online instead.

The study found that the majority (62%) of shoppers would leave a store and buy online for a price up to 20 percent below the one in the store.

Viewed another way, many of the relatively small number (13%) of hardcore, mobile price-checkers will leave and buy elsewhere for almost any deal.

The red flag for retailers: that 13 percent is destined to go up.