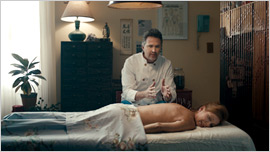 The two new commercials are airing across 10 major networks including ESPN, TBS, Bravo and FX. The TV activity will be complemented by a mix of digital, tablet, mobile and gaming video placements targeting outlets such as YouTube, Hulu and CBS Interactive. The campaign also includes a mix of online, social media and billboard communications.

Originally launched in 1998, the Holiday Inn Express “Stay Smart” television campaign was on-air for 11 years, and became one of the longest-running hotel advertising campaigns in television history, exceeding industry norms. Picking up where the brand left off, the current campaign is a “fun and humorous exaggeration of how smart it feels to stay in a Holiday Inn Express hotel,” according to the company.

“It is important to note that this is not the same Stay Smart campaign from before,” Balsley says.  “The campaign has changed because our guests have changed. They are now digitally connected 24/7, even while on the go.”

That is why the TV commercials, titled “Acupuncture” and “Equaltion,” are just the first step in a campaign that will truly embrace digital and social media, she said.

The TV ads were created by Ogilvy & Mather, the creative agency for the Holiday Inn Express brand, and directed by The Pelorian Brothers. All media planning and buying for the campaign was handled by Mindshare.

The spots aim to reaffirm that the Holiday Inn Express brand as the smart choice for savvy, value-conscious travelers, Balsley says.

“The Stay Smart campaign was not only incredibly successful, but also remains beloved by consumers even today, which is why we are bringing it back,” she says. “The new campaign gives us an opportunity to showcase the Holiday Inn Express brand to a new audience in entirely new ways.”

“Acupuncture” takes place in a spa where a woman is being treated by an “acupuncturist“ who reveals he is actually a Panini delivery man, and “Equation” features a man resembling a professor who solves a difficult math equation in front of a classroom of university students, and admits he was just visiting his daughter who attends the school.

The Holiday Inn Express target audience is the smart traveler, who is looking for an efficient hotel stay at a great value, Balsley says.

“Think of the ‘road warrior’ who books travel on the go,” she says. “They're probably using their phone to do so, arrive at the hotel late in the day, want to get a warm and efficient welcome, and are energized by having a great place to sleep, a great shower and a breakfast that will jump start their day.”