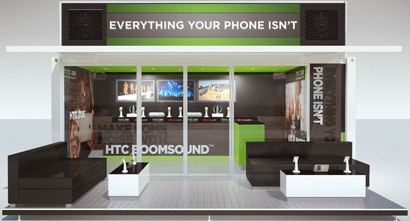 Having spent the last several years being “quietly brilliant,” HTC is looking to make some noise in marketing its latest smartphone, the HTC One.

With an overall marketing spend that will double any of its previous launches, the company is looking to get the device (which is already garnering buzz in the tech community), into the hands of consumers with a heavy experiential element, according to Erin McGee, HTC’s vice president of marketing for North America.

“We’ve been here before, but we haven’t been this focused and prepared,” McGee tells Marketing Daily. “We’re going to sustain [our marketing levels]; so we’re not going to go away.”

In advance of the phone’s availability through AT&T, Sprint and Best Buy stores later this month (pre-orders begin this week), the company is presenting the HTC One as “Everything your phone isn’t,” with a heavy focus on design (such as its zero-gap aluminum unibody), as well as its personalized information feed BlinkFeed and BoomSound features.

“It’s creating a personality,” McGee says. “It’s pulling people into the conversation with a little bit more personality [than we’ve had] in the past.”

In addition to television and print advertising, the effort relies heavily on putting the device directly in consumers’ hands, through a program the company is calling “The HTC One Live Experience Tour.” The effort includes pop-up kiosks in malls, music presentations and displays in cinemas, all to reach young, tech-savvy consumers.

In several major markets (such as Philadelphia, Chicago and Atlanta), HTC will be opening “BoomSound Lounges” designed to showcase the phone’s front-facing stereo speakers and integrated Beats audio. The brand will also sponsor concerts with major artists (Grouplove, Pharrell and Manchester Orchestra) in three of those markets (New York, Chicago and Los Angeles), with the audience limited to 1,000.

In addition, HTC will be opening “showrooms” in 11 markets starting next week. Placed in high-traffic mall locations, the pop-up stores will feature interactive experiences and devices for consumers to actually use the phone. Similarly, the brand will offer product demonstrations in movie theater lobbies across the country to get more people to try the phone.

“These consumers are discerning customers,” McGee says. “They are looking for discovery. We think setting [the HTC One] in their hands is a key to the purchase experience.”