Manning Back For Buick Verano 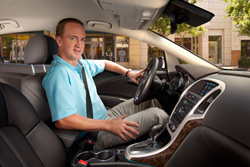 Peyton Manning is back touting Buick's Verano luxury compact, this time talking up the vehicle's safety virtues with a national TV push under the "Experience Buick" platform. The TV ad will air during the NCAA Men’s Basketball Final Four this weekend.

As in last year's campaign, which focused on the car's IntelliLink telematics platform, this ad will use football as a metaphor, although for auto safety. And while last year's effort had Manning calling plays to IntelliLink, the new one has him comparing the virtues of the car’s blindside safety technology to how one needs teammates to help avoid a blindsided tackle.

In the ad, Manning goes to make a lane change, when suddenly the blindside indicator lights up. Another shot shows him backing out of a driveway when a truck suddenly appears behind him. "It's like I've got the whole team protecting me," he says.

"He's approachable and that's really synonymous with what Buick is all about," says Tony DiSalle, Buick VP marketing, in a video about the spot.

At the New York Auto Show, the marketer told Marketing Daily that Buick also keeps its distance from GM's other luxury brand, Cadillac, by maintaining some of its brand equity as a less exclusive, more neighborly luxury brand, although that neighborhood would ideally be upper middle class.

While Cadillac hasn't yet gotten the even more exclusive cachet it is going for, the  brand is definitely hoping to grab some of that equity with the new CTS. That car, unveiled at the show, is clearly intended to some blindsiding of its own against Mercedes' E Class and BMW's 5-Series cars.

Early last month, Buick extended a Verano campaign, "Unexpected," around the time the car started appearing in dealerships in good volume. The lead spot focused on the car's sound-blocking qualities, which have long been a hallmark of the brand. Another ad played with the infotainment side of IntelliLink by showing a fleet of buses full of bands rolling behind the car, intended to embody what you get when you use the platform The raft of "Unexpected" ads have also been in "Celebrity Apprentice" and NCAA Mens Basketball.

The sports alignment includes the "Human Achievement" platform, comprising a documentary series about former NCAA stars who have gone on to do good for their communities.