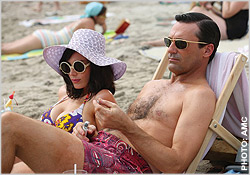 Editor's Note: This special weekly edition of Mad Blog will focus on recapping and analyzing each episode of "Mad Men'"s sixth season.

In the season opener, we quickly learn that not much has changed, insofar as our antihero Don Draper is the type of guy who goes to heaven (Honolulu, with his bikinied TV star wife) but drags his own hell with him (Dante’s "Inferno,” a tome which we later learn is a gift from his mistress.)

So many disappointments, so much time, in a slow, sometimes heavy-handed, many-layered, double-header of an episode dedicated to death and mothers.

At I first thought that the Hawaiian trip, complete with the tacky Don Ho/Elvis entertainer and the fire twirlers, had to be one of Matthew Weiner’s great cosmic jokes: Two minutes into the premiere, “Mad Men” has jumped the shark!

After all, that phrase name comes from an episode of “Happy Days,” when the whole crew took a straightfaced trip to Hawaii to perk up ratings -- and, while surfing the blue ocean in his black leather jacket, Fonzie literally jumps the (very fake) shark. 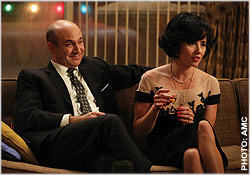 The casting of heart surgeon/neighbor Dr. Arnold Rosen also seemed to me to be one of Weiner’s weird inside jokes, since the short(ish) bald(ish) actor looks so much like him. Or maybe Rosen is meant to be a stand-in for Weiner’s dad, who was a very upstanding neurologist. In that case, it’s even weirder that Jon Hamm’s character is befriending the Weiner doppelganger. It’s nice that Don finally has a genuine pal, whom he admires -- but true to form, death-wish Don/Dick repays that friendship by fucking the guy’s wife.

But let’s get to what was good: I enjoyed the Peggy parts. Peggy is now the good Don, complete with a missing empathy gene for her staff. I loved her phone interaction with the very bearded, very mellow Stan. It’s a great device for keeping both agencies in the picture and cross-pollinating the stories. (And come on -- they are naturals together!)

Plus, the way the ever-escalating and dehumanizingly brutal Vietnam war -- with soldiers cutting off Viet Cong ears and wearing them as necklaces -- was woven into the story of Peggy’s earphone Super Bowl ad was genius. 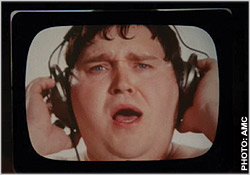 (One quibble: this was only the second Super Bowl in history, and back then, no one was watching for the commercials. That wasn’t going to happen for another 10 or so years, with the Mean Joe Greene spot for Coke -- a trend later cemented in 1984 with the mighty Apple Macintosh ad.)

But the upcoming Super Bowl did provide a way to telegraph the time of year and a tight deadline.

As it turns out, the original idea -- with the guy in the toga, and the headline, “Lend Me Your Ears” -- was pretty lame and cliched, even then. The work that came out of the crisis was much fresher and more sophisticated, just as  sometimes happens in the business: it feature the big-headed, expressive Zero Mostel-type comedian soundlessly listening while mugging on camera. Peggy got the idea from watching boyfriend Abe (who is still around, and now looks like Frank Zappa) bop his shaggy head while wearing the earphones.

But on to the black sheep in Breck-Girl clothing: semi-fat Betty, and her family. Increasingly, the Francises at home are turning into the Addams Family, (“The house is a museum”), with young Bobby as Pugsley. In a two-hour show larded with death references, Bobby’s saying he liked the violin case “because it looks like a coffin” didn’t actually seem that heavy, coming from a kid growing up in that dark Victorian pile. 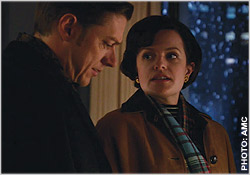 But what weirdness lurks (or Lurches) within! That speech that Betty made about tying the girl down so her husband could rape her was really crazy and grim. “What the hell?” Henry responded, as the steady, centered guy he is. But Betty relates to other women only through seeing herself in them or being jealous.

Thought the whole squat scene near St. Mark’s Place was as phony-looking as the snow, the scene of Betty searching for violinist Sandy in the bombed-out rubble, while wearing her Hermes head scarf, good handbag, and sensible shoes, did have its Shakespearean moments. Betty goes there ostensibly as a humanitarian, to save the talented teen, while the filthy squatter guys inveigh against the Establishment and make fun of her as “Blondie. ” But deep down, both sides really want their mommies to make them goulash.

Having a “pot to piss in” would seem to be a subtheme-- Betty observes a guy in the squat doing just that.

Certainly, no one called it “pot” in the show, but the idea of marijuana is everywhere. Betty asks Sandy, “Are you on dope?” Megan stashes reefers in her teeny bikini bottoms, and Joan smells "reefer" in the agency’s ripe creative air. 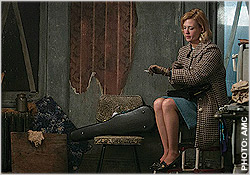 Marijuana is flowering like male sideburns: Harry Crane himself is a sideshow, and Ginsberg has also grown a moustache and long hair. The new hirsuteness of the men will be increasingly comic, as will be the inevitable polyester.

Meanwhile, the act of Betty changing herself into a Veronica sure was a shocker. Is the dye job -- from cornsilk color to Cadillac black -- meant to suggest that she’s turning into her creepy mother-in-law, Mrs. Francis?

Death and mothers: The contrast is great between Roger (“It’s MY FUNERAL!”) and Don. One was given everything, including too much mothering, the other got nothing, but they both seem to feel shame about how they treat the women in their lives.

Roger is trying to look inward, but can only jabber superficially and make jokes with his analyst. Meanwhile, Don seems increasingly paralyzed by his aggressive denial and compartmentalizing -- when “Jonesy” the doorman had a heart attack, Don was useless.  He’s spiraling down into some sort of abyss. (The scene of him suited up, sitting and drinking in his apartment’s sunken living-room conversation pit before the funeral, watching the "Donna Reed Show' while his maid vacuums, is  “Lost Weekend”-ish.) He can’t even see that the ad he came up with for the hotel clearly shows his suicidal side. And when the photographer tells him to be himself, he’s lost. 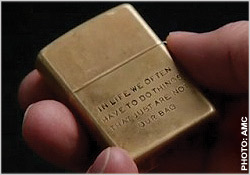 Obviously, the accidental exchange of the lighters with the soon-to-be-married private in Hawaii brought back the idea of Don's original flick of a lighter, which caused the explosion that allowed him to exchange dog tags with his officer in Korea, the catalyst for his complicated life of lies and fraudulence.

Don tries to throw the lighter away in the trash, but it comes back to haunt him. And no doubt, so will the private, either in a body bag, or as a younger- brother-substitute thorn in his side.

Meanwhile, Megan has gotten her wish. She’s in a soap opera, and getting recognized by fans. She’s increasingly career-obsessed and self-involved, with little time for her husband. (And Jessica Pare plays her self-absorption perfectly.) But does that justify Don cheating on her, just as he did with Betty?

The episode opens with the sound of one body rhythmically pounding another: Dr. Rosen is resuscitating the doorman, while Don watches in horror. It ends with Don, he of the multiple 4 a.m. forays, having sex with Sylvia, Arnold’s Italian Catholic missus, one body on top of another. She fits the bill of his older, dark-haired paramours-- a mommy figure, maybe? It’s a way to alleviate anxiety, as the good doctor put it.

And let’s not forget that Don has given her husband a free camera from his client -- a Leica, an M-2 model. It turns out that PFC Dinkins tells Don about his .50 caliber machine gun, also an M-2, which could blow up a water buffalo. “I could paint this place red,” he says.  Will the camera figure into a crucial plot point? Do married guys indeed live longer?

I wouldn’t say the opener was fun to watch -- with the exception of a couple of jokes, like  Roger’s secretary crying, deadpan, that his dead mother was “Always so polite on the phone, when she could hear me.” But Weiner has given us a start with body, soul, and Defcon jokes. I’d give it a C-plus as drama -- too dark, depressing, slow, and disjointed. But the more I think about it, I’d also give it an A-minus for seeding so many possible story lines.

Rather than Dante, I’ll go with Sartre: Hell is other people.

The episode opener shows Peggy laboring to produce a Super Bowl ad for Koss headphones in 1967. But the kind of advertising creativity that was to stop viewers in their tracks and become an anticipated part of the whole Super Bowl-watching experience didn't become the norm until much later. This Xerox "Monks" spot from Needham Worldwide ran on the Super Bowl in 1977, and is recognized in the Clio Hall of Fame for its excellence. While the comic actor playing Brother Dominic reminds me of Peggy's toga-wearing star, this spot, like the powerful copier it sold at the time, performed miracles.

mad men, tv
16 comments about "Episode 601-602: The Doorway -- Or, Death Con 5, As You Leica!".
Check to receive email when comments are posted.
Read more comments >
Next story loading