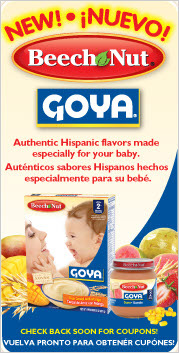 The new line, offering natural ingredients and no artificial colors, flavors or preservatives (positioned as “as close to home-made as possible”), is designed to bridge “Hispanic mothers’ desire for healthy, traditional baby food with their need for convenience and nutrition in today’s hectic world,” added Goya Foods President Bob Unanue.

A study done for Beech-Nut confirmed that desire, with two-thirds of Hispanic mothers saying they are not satisfied with currently available baby food choices, and that they wish there were more appropriate flavors from which to choose.

The new line, expected to be available in stores throughout the U.S. by the end of June, includes wheat, corn, oatmeal/bananas and rice/mango cereals, beef and chicken with broth, and “stage 2” jarred baby food in flavors such as guava, mango, apple mango, peach mango and banana strawberry, plus vegetable offerings such as a medley with sweet potato, carrots and squash. A higher stage, with more texture, includes flavors such as banana/apple/plum, pear/apricot and rice pudding with raisins.

Beech-Nut Nutrition is held by Hero Group, a family-owned food company headquartered in Lenzburg, Switzerland. Hero is a leader in the infant nutrition category, with operations in more than 30 countries in Europe, North America, Middle East/Africa and Turkey/Central Asia. Goya, the largest Hispanic-owned U.S. food company, manufactures and distributes more than 2,200 food and condiments products from the Caribbean, Mexico, Central and South America.