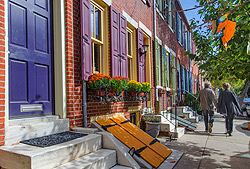 The statue of what? Let’s face it -- the big tourist attractions in big cities frequently are kind of frozen icons that don’t really have much to do with the life of the city. To that end, Philadelphia is letting the Liberty Bell ring for itself and instead focusing on the 'hood, specifically the colorful neighborhoods encircling the central hotel district. The effort, via the Greater Philadelphia Tourism Marketing Corporation (GPTMC), follows last year's "With Art Philadelphia" campaign that focused on Philly's Museum Mile, and was timed with the opening of the Barnes Collections’ new museum downtown.

“Philadelphia Neighborhoods” is, per GPTMC, designed to drive overnight visits to the region by spotlighting the restaurants, art galleries, independent shops, music venues, parks, and festivals in 14 neighborhoods that are a 15-minute jaunt from downtown.

It also follows a trend in big-city tourism programs that puts a little less focus on the big, traditional attractions, and directs people to other areas of the city that give it bona fide character -- places locals know about and visitors would probably enjoy, if only they knew about them. It also gets some tourism dollars dispersed a little more broadly beyond the traditional draws.

GPTMC's program director Alethia Calbeck says many visitors have seen the main attractions like Independence Hall, so it's not unlikely that they would have a "been there, done that" sentiment. "We always want to invite people back to the city, so we think this creates a wonderful pathway to new and authentic experiences," she says.

Calbeck says the program avoids "siloing" the neighborhoods and what's happening in them. "One of our charges was to show people how easy it is to get around."

Calbeck says Philly's program is directed at both local audiences -- including to the city's residents -- and regional travelers. She says the goal is to encourage a deeper level of exploration partly by highlighting the virtues of contiguous neighborhoods, so one doesn't have to spend half the day wearing out shoe soles and travel funds. "It's practical destination marketing to help people come up with a usable plan."

The campaign also brings in a "Neighborhood Advisory Committee" comprising 30 people from each neighborhood tapped to talk about events in their areas, act as liaisons with local businesses, and connect GPTMC to people who know the local lore.

The organization says the new Web site has more than 600 new attraction listings, along with itineraries, maps, videos and photos. User-generated content on Instagram and Foursquare will stream to the site. GPTMC’s blog, uwishunu.com, will expand its neighborhood coverage with new content and visuals. Instagram will be key to the social media campaign starting in April, where an "Instagrammer" will showcase the neighborhood.

GPTMC's year-long research program dealt with things like accessibility, neighborhood amenities and preparation for visitors. The team will monitor the success of the campaign post-launch by assessing the social buzz associated with various neighborhoods.