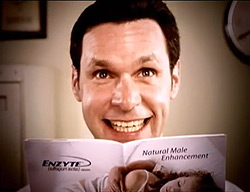 Eighty-seven percent of Americans are fed up with bad ads. So much so that 19% say bad ads are even getting in the way of them having sex, according to a Harris Survey.

The 2013 Bad Ads Survey, to be unveiled Thursday by InsightsOne, was developed to see how Americans react to the best -- as well as the most annoying -- ads.

It found that Americans will ignore a company completely if it sends too many bad ads: 23% after just one ad and 43% after as many as two.

“While the results of the study may seem amusing, they point to a real concern in American life,” says Waqar Hasan, CEO of InsightsOne, in a release. “People are fed up with seeing ads and other communications that aren’t relevant to them as individuals.”

The survey also found the types of ads Americans find most annoying are pop-up ads (70%), lottery scams (70%), male enhancement ads (66%), emails from deceased African leaders who have left them money (64%), ads for products and services they do not need (58%) and female enhancement ads (54%).

Over 2,100 adults ages 18 and older were surveyed Feb. 27 to March 1. The study was aimed at determining American attitudes and behavior around the ads they see every day.

The results may create challenges for ecommerce companies that advertise and sell over the Web. In fact, 88% of Americans say they have even been “flooded” with online ad spam, and 91% of those say they take action when it occurs.

Thirty-six percent of those who have ever been flooded with online ad spam say they would leave a Web site because of too many irrelevant ads, and many more would begin to feel that the company doing the advertising doesn’t respect their time (26%). For email, 60% will unsubscribe from future messages, but a surprising 45% will simply ignore future communications.

Men were statistically more likely than women to take certain actions, which include stop using the product (17% vs. 11%), completely boycott the company doing the advertising (16% vs. 10%), respond angrily (7% vs. 3%), hit their computer or mobile device in frustration (5% vs. 3%) and especially feel the company doesn’t respect their time (30% vs. 22%).

“The American people are tired of companies that appear to not respect or understand their needs,” says Hasan. “The results of the study show that consumers have a real limit on what they’re willing to put up with, and this very real problem will have a negative impact on a company’s income statement if they don’t do something about it.”