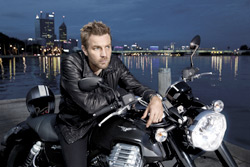 Actor Ewan McGregor is the star of a global campaign for the Milan-based motorcycle division of Piaggio S.p.A., Moto Guzzi. The “My Bike, My Pride” global advertising push backs the new 2014 California 1400 models (they come in Custom and Touring versions.) The company launched the bikes in the U.S. at a two-day event in Malibu last week with dealers, invited guests, enthusiasts and tastemakers.

The print and digital campaign, the creation of which set McGregor back a couple of days on his latest film, "Son of a Gun," was shot in Western Australia, in and around Perth, by Italian lensman Paolo Zambaldi. The ads have a rich, chromatic feel with McGregor posing on the bikes in Perth and other spots in the remotest region of a remote country.

Launched last week in Europe, the effort is getting a PR push, with creative running on digital properties in a range of lifestyle and in vertical publications, per the company. Piaggio Group says the effort, via Italian agency The Ad Store, is backed by the largest advertising budget to date for the Moto Guzzi brand.

Besides now and then wielding a light sabre, McGregor has spoken for BMW Motorrad, and thrown a leg over Austrian motocross brand KTM. He and TV adventurer, travel writer and actor Charley Boorman have done a pair of motorcycle global-trek films, "Long Way Round" and "Long Way Down." BMW Motorrad was the motorcycle sponsor of both films, but in the latter -- from London to the tip of South Africa -- the pair made a stop at Moto Guzzi's museum in Mandello del Lario, Italy.

Moto Guzzi says its relationship with the actor is organic, as he's a fan and owner. The relationship started in 2007, per the company, when McGregor attended GMG (Moto Guzzi World Days) in Mandello del Lario, riding in on his white vintage California Moto Guzzi bike.