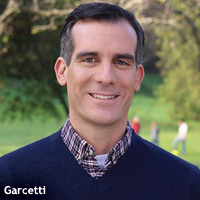 The challenge for Engage:BDR becomes finding online the 1.9 million voters in the Los Angeles area based on their offline voter file data. Data is segmented into several buckets, identifying voters who are most likely to vote for Garcetti, on the fence, or never likely to vote for him -- and more.

The technology will tie together offline voter file data with neighborhood Internet Protocol (IP) addresses. "Once we find the voters online we serve them ads based on the category bucket," said Ted Dhanik, co-founder of engage:BDR, explaining how potential voters get served dynamic creative ads based on their neighborhood and time of day.

The offline data voter files tie to IP zones and streets through online transaction data, enabling engage:BDR's technology to target the ads. The targeted ads will serve up on desktops rather than mobile because the "IP addresses on mobile are so crazy," he said. "Some look like they're coming from Poland, but they're really in the U.S."

Dhanik said the company will support Garcetti's campaign through mobile ads with a message that pushes people to vote, rather than one that is more targeted, and will tap into phones' longitude and latitude signals to serve the ad.

engage:BDR is working with the political action committee, an organization supporting Garcetti's campaign. Rick Jacobs, founder and chair of the Courage Campaign, and Mary Jane Stevenson, the former California State Director for the Obama Campaign, lead the PAC staff, which is separately funded from the Garcetti camp. The PAC intends to use innovative technologies, similar to the Obama campaign, along with traditional tactics like door-to-door campaigning and phone banks to target young voters.

Garcetti is behind a movement to help the city of Los Angeles increase its digital transparency by making available public data online. It will make the city become more transparent, officials believe. The buzz points to an "open-data government" initiative similar to the NYC OpenData strategy launched a few years ago. The Web site is where NYC makes available a wealth of public data generated by various New York City agencies and other City organizations available for public use.