It's Spring; Gentlemen, Start Your Engines 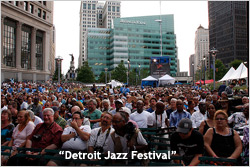 It's spring, so we will most certainly see automakers' names and vehicles behind such outdoor happenings as concerts, films, performance, art, cuisine, amateur and extreme sports (automakers' involvement in traditional sports is so ubiquitous it need not be mentioned herewith), and a whole bunch of other lifestyle events.

Now that this cruelest of months seems to be loosening its grip a bit, Michiganders and a lot of others can look forward to the Detroit Jazz Festival over the Memorial Day weekend. And it’s imported from Detroit: Chrysler, LLC's eponymous brand is back for the second year as the official presenting sponsor. The concert is billed as the world's largest free festival, with a quarter of the audience coming from out of state.

The deal makes sense for Chrysler because of its positioning and also because the automaker has category exclusivity baked into the partnership. Said Chrysler Brand President Saad Chehab, in a statement: "The Detroit Jazz Festival spreads the message about the beauty of Detroit and provides an enriching cultural experience for jazz and music lovers across the country. The people and the commitment behind these events is what continue to inspire the Chrysler brand's 'Imported from Detroit' campaign."

It’s a good demo for Chrysler: the concert (and probably just about every jazz festival) attracts the more demographically desirable auto prospects. The organizers say 64% of them are between 25 and 54 years of age, and they are "highly educated, active consumers who appreciate the finer things and know how to have a good time."

To the east (and a good way south), Audi is sponsoring the the American Film Institute's (AFI) documentary festival, AFDocs presented by Audi, central to which is the "AFI Catalyst Sessions: The Art of Moving Reality," a mosh pit of filmmakers, thought leaders, policy-makers and audiences on the National Mall and in the Penn Quarter area. One can also be sure that those attendees will be a consumer Klondike (and not the ice cream bar) for Audi.