Marketers: Meet The Rich At The Club 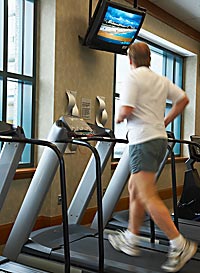 When trying to reach very affluent consumers -- especially younger ones -- hit the gym and health club. But don't avoid traditional media unless you want to miss older affluents.

According to the Shullman Luxury and Affluence Monthly Pulse, based on an online survey of five income groups ranging from the general population to those making over half a million, older and very-high-income consumers are more likely to have seen or heard advertising through many of the traditional media platforms during the past 30 days.

Younger very affluents are just harder to reach, although good old TV is a good bet. And so are the movies: the youngest and oldest segments are more likely than the 35- to-54-year-olds to have seen advertising there, per the study.

And it seems younger consumers who are in very wealthy households are less apt to recall or are less accessible to ads. Ninety-one percent of consumers 55 or above in these $250,000-and-more households reported seeing ads on TV in the past month, versus 64% of those who are 35 or under. The gap is about the same for magazines, but huge (76% of older versus 31% of younger) for newspapers. Perhaps surprisingly, the gap is also big (75% versus 52%) for Web sites.

And more of the over-55 very affluents report having seen ads on tablets over the past month than 35-and-under consumers in this income group, per the Monthly Pulse. The only major switch is on Facebook and other social media, in which 38% of the older adults and 46% of the younger group reported having seen ads.

Over 65% of very affluent consumers said health clubs and gyms are the places where they are most ad receptive -- possibly because while one is jogging, biking, or rowing in a gym, one is not actually going anywhere and is therefore surrounded by messages that are not easily ignored. Eighty-five percent of 35-and-under very affluent people surveyed said they were interested in ads they saw in the gym or club (only train, bus or subway ads topped that number. Smartphone ads came in third for the youngest cohort.) Sixty-seven percent of those 35 to 54 said they like ads at the gym, while 50% of those over 55 said they could be reached at the gym too.

Among all groups averaged out, magazines, newspapers, television, sports venues, Web sites, medical offices, smartphones, radio, malls and transit areas follow workout venues, in descending order. For the 35-to-54 age segment, health clubs/gyms and medical offices topped the list; and the 55-and-overs were most interested in advertising they saw in magazines and newspapers.