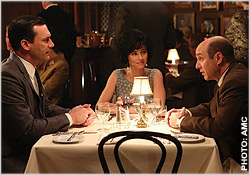 Called “The Collaborators,” the third episode of "Mad Men"’s sixth season illustrated the politics of appeasement and double dealings, as seen in love, war, and the corporate sale of beans. A chewier episode than the opener, it did suffer from some visual weaknesses (Jon Hamm himself directed!) and musical clichés (the use of “Just a Gigolo” was a little too on-the-nose in the end, when Don crumples at his front door).

But there was also some magnificent stuff. Both Pete and Peggy have developed into mini-Dons. Trudy's reaction to Pete's betrayal (boy, can that Alison Brie act!) made for top-notch theater, while  Peggy, in an unguarded  moment, was set up to betray Stan.

And the way the verboten happened, and the mistresses and wives of Don and Pete actually talked and interacted at parallel moments, rang true.

Some of it felt very timeless: With the Pueblo incident fresh in the news, North Korea is acting aggressively against the U.S.; after The Tet Offensive, Americans have lost faith that their government is telling them the truth about a disastrous quagmire of a war. 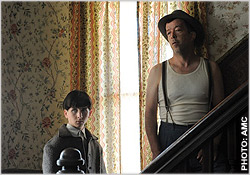 And some of it felt very ancient: Don is totally turned on by seeing his mistress dressed in an arresting, Lucy Ricardo-style house dress, topped off by the type of head schmatta women used to favor while out at the clothesline, beating their rugs. Talk about a stereotyped housewife -- all Sylvia needed was a rolling pin while arguing with her doctor hubby about money, in an otherwise private scene that Don observed through open elevator doors.

And there was a nice double meaning in a line leading to the daytime assignation: Don feigned forgetting his cigarettes as an excuse to go back to Sylvia, while her husband, Dr. Rosen, told him: “You need to stop.”

Don’s pathological need to cheat -- in this case, spurred by Sylvia’s otherwise testosterone-deflating getup -- was explained in a stilted, but very sad, flashback that filled in another snippet of his impossibly tough early life: When you've lost your mother at birth (and grow up being called a “whore child” named Dick), and have seen your father killed before your eyes (kicked by a horse), and then watched through a  keyhole in the door as your pregnant stepmother was "taken" by ole’ rooster Uncle Mac in his cathouse in return for rent payments, a person could become a compartmentalizer!

So Don used his standard line on Sylvia when she asked how he could face his wife and her husband over dinner: "This never happened.” Similarly, he said to Peggy after the delivery of her baby: “You won’t believe how much this never happened.” 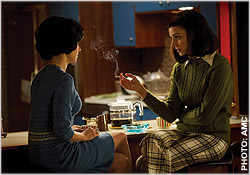 I thought the idea of giving Sylvia money when it was all over was a bit too obvious, but she didn’t seem to mind. Also, what’s with the good doctor, a heart surgeon, running out of money?

Last week, it seemed the only happy person around was Megan. She had achieved everything she wanted: a role on a soap opera and a modicum of fame, all while still smoldering and married to Don. This week, we saw the other side of that story. Don had barely spoken to Megan in Hawaii (although they did have marijuana-mediated sex).

The scene of the two women in Don’s life meeting in the laundry room, over their plastic baskets, looked just like a setup for a detergent commercial at the time, with housewives comparing the whiteness of their laundry loads. But it was far more complicated than that. This time, Sylvia witnessed an otherwise private scene: Megan firing the maid, and then crying. If you recall, Betty also cruelly fired Carla. In each case, the dispirited wife’s anger, and attempts to fix her household by firing the maid, were misdirected. 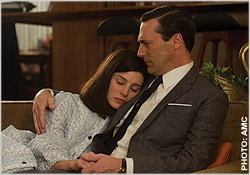 he emotional chasm between Megan and Don becomes clear when she tells Sylvia about her miscarriage before she works up the nerve to tell Don. The Megan/Sylvia exchange was another conversation filled with double meanings and guilty feelings. Sylvia is shocked to learn that the couple still has sex, since Don had used the usual line that he and his wife were “moving apart.” And Megan has no idea that she is confiding in the enemy.

What was Megan trying to say about being brought up Catholic? Is it possible that she’s doing some dissembling of her own, and that she had an abortion rather than a miscarriage?

Earlier, Don kisses off Megan like a daughter, not a wife, when she says she’s too ill to go to dinner. When she finally does come clean, Don’s reaction is hardly warm and tender, although Megan takes what she can and cuddles up to him.

Before he had to leave the dinner, Dr. Rosen, who seems in the dark about his wife’s affair, talks about the events in Korea and Vietnam, and is up on every nuance. Don is not. It seems he couldn't care less about current events -- all of his references, including the ones he makes in ads, are about himself and his own internal needs. 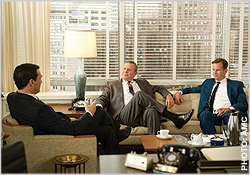 As for Pete, I knew with the first offer of “throwing in a free hot dog” that things would not end well. But I thought the group would be more into “swinging” (vintage "Ice Storm"-type key-exchanges) than the unfortunately timeless walloping-the-wife-style marital abuse. Ever the gentleman, Pete was quick to blame the victim, while Trudy showed that she's whip-smart and iron-willed. She doesn’t want to fail -- and divorce, in her circle, is failure -- so she will keep Pete on a string as she destroys him.

The episode was about housekeeping in every sense, even for the Heinz Beans client. And Don does a brilliant sabotage of Herb the Jaguar guy’s brutish plans. There was no Betty, and way too little Joan in this episode. But Joan really had no credibility in getting on her high horse about Herb’s shortcomings.  Was there a victim in that crime? She got what she wanted out of that hard bargain.

Mostly, the episode was about defining the enemy, which is sometimes very hard to do -- especially the one within.

So Mr. Heinz Beans doesn't want to share his agency's insights with Mr. Ketchup. Here's an English Heinz commercial (for a "tin" of beans) from the 1960s: it's not a bean ballet, but offers a different kind of poetry with the line "beans, beans, beans."

mad men, tv
10 comments about "Episode 603: The Trudy Pact -- Or, He'll Have The Steak Diablo".
Check to receive email when comments are posted.
Read more comments >
Next story loading