Mobile Commerce Adoption on the Road 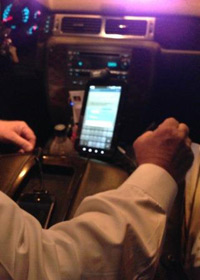 No matter where you go these days, there’s a good chance of coming across examples of mobile commerce.

As a frequent traveler, I often see various forms of commerce in action. For example, it’s become routine to see consumers holding their phones in front of checkout scanners at Starbucks as they pay for their drinks.

What interests me is how people are adapting mobile technologies in sometimes small but innovative ways in the course of what they do.

Leaving a Marriott hotel in Phoenix today to head to the airport, I noticed the driver in the private car service had his smartphone charging just behind a mounted Samsung tablet.

I frequently come across taxis whose drivers use the Square dongle to accept credit card payments, so this is becoming somewhat the new normal as Square continues its national expansion.

The Samsung tablet had an Intuit dongle for payment and the driver seemed quite enamored with the device. It was not so much that he could easily take payments by swiping a credit card, but the various empowerments the tablet provided.

He told me how the system allowed him to accept payments to the limousine service for which he worked but that it also allowed him to take payments for his own personal account when hired for outside work.

While taxis typically have those tiny paper printers installed, my driver gave me the option of the receipt being sent to my phone or email. He proudly showed me some of the other functions, including various GPS options and tracking of customers with locations and times.

He also said he used his tablet to make signs with people’s names so they could find him at baggage claim after their flight.

I asked the obvious question about how he printed signs made from the tablet inside his car.

“We don’t print them,” he said. The driver simply makes a sign on the tablet and brings the tablet into the airline terminal where he, and other drivers, hold up tablets with arriving passengers names.

No directions came with the tablet suggesting it be used as an electronic sign. It’s just another small case of mobile meeting human ingenuity.