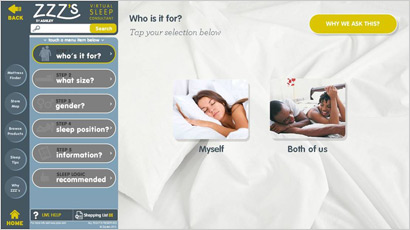 When Ashley Furniture decided to roll out ZZZ’s, a new mattress store concept, it knew it needed a big new idea -- something that would meld the ease of online shopping with importance of real-life mattress testing. So instead of greeting shoppers with pushy salespeople chattering about coils, springs and low, low prices, each shopper gets her own tablet, to click her away around the store.

“You’re not accosted by a salesperson the minute you walk in,” says Ro Kumar, CEO of Digital Aisle, the Chicago-based agency that designed the technology. “You are greeted by a sleep consultant, and the atmosphere is more like a spa than a store. He or she hands you a tablet loaded with our app. After entering height, weight, gender, and sleeping pattern, it gives you three recommendations. Shoppers can then walk around the store, and test out the mattresses in the showroom, without a salesperson breathing down their neck.”

The first of the stores open this week, and the company hopes to have 40 up and running by the end of the year.

Sales associates are available to answer questions, but the idea is to let the machine make the suggestions, so that shoppers can then decide which mattresses and pillows are most comfortable. As they narrow their selection, they can tap to learn more about any of the store’s selections. When they are ready to buy, associates can help them finish up the sale.

Buying mattresses is pretty challenging, explains Kumar, whose agency has also designed a Virtual Bartender app for Diageo. “Typically, these are small, off-mall stores, with a sea of rectangles. There’s a pushy sales guy with mustard stains on his tie. And the emphasis is on price. So instead, Ashley wanted to focus on the concept of selling better sleep, not a better mattress.”

While other stores, from Apple to Sears, are using tablets to aid in-store sales, the ZZZs by Ashley concept was built around the tablet idea from the very beginning, he says. “The idea was to use technology to aid confusion.” (Tablets won’t function outside the store, to cut down on theft.)

Because the chain is focusing on higher-end shoppers, they are “more open to the scientific process of approaching sleep. It’s not that they are not price conscious -- they are,” he says, acknowledging that they will likely use their own smartphones to compare ZZZs’ prices to other stores. “But price isn’t first on their list. A mattress that will give them a better night’s sleep is.”

He says the company’s research has found that once you can get a shopper -- typically a woman -- to actually lie down on a bed in a store, “that’s 80% of the sale.”