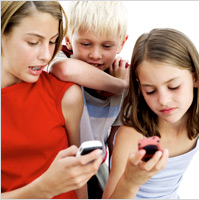 It looks like teens have money to spend and many will be well-equipped to be spending it via mobile.

In its twenty-third, semi-annual “Taking Stock with Teens” study, Piper Jaffray found double-digit increases in spending by teens, who cited improvements in both current fashion spending and intention to spend, across income levels and genders.

Key areas of spending were identified as in fashion, which accounts for 39% of teen budgets, beauty and food/restaurants, which are at or near the highest levels since early 2000.

When combined with some of the mobile characteristics of teens, the demographic group looks to be spenders with the mobile tools to execute the buys.

The current teen profile, based on the study:

When this data is juxtaposed against last week’s emerging digital platforms study by Edison Research and Arbitron, an even more potent mobile teen-spending picture emerges.

While various studies show U.S. smartphone penetration at about 55%, the numbers are higher within the teen group. For example, 60% of those 12 to 17 years old have a smartphone and in the 18- to 24-year-old group, three quarters own one, according to the Edison Arbitron study.

The 12- to 24-year-old group also communicates via mobile differently than their older peers, with 50% mostly using text messaging compared to 24% in the general population.

The point is that teens are becoming even more mobile empowered and their discretionary spending is increasing.

With smartphone penetration heading toward the 70+ percentage penetration rate over time, teens clearly are getting there first.

As these teens age, it will be interesting to see if many of their mobile usage and spending habits stick with them. If they do, mobile commerce will be in a different place.