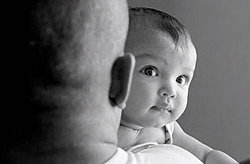 For the first time in years, Johnson & Johnson is launching a global corporate campaign, "For All You Love." The effort, via TBWA\Chiat\Day, shows mothers and fathers with their children, children-to-be, spouses, and family at different stages of life. All done in slow motion, shot in black and white, and set to a nursery rhyme-style cover of Guns ’n’ Roses’ “Sweet Child of Mine” sung by children. We kid you not. Somehow it works. “For all the things in your life that make life worth living," says the voiceover as creative draws to a close.

Rob Schwartz, global creative president at TBWA\Worldwide, points out that the company had not done a corporate ad campaign in a decade, "But they are the number-one most-respected brand, so they saw an opportunity to crystalize that and go back to the core of who they are, and modernize it."

The effort comprises four films -- one :60 and three :30 executions. In addition to the films, it includes a redo of the corporate Web site and, per Schwartz, a big social-media element as part of the next phase of the campaign.

Schwartz tells Marketing Daily that the campaign was developed and timed to reflect, to some extent, the 70th anniversary of the famous corporate credo penned by Robert Wood Johnson, co-founder of the company, when he was chairman shortly before the company went public. Says Schwartz: "We wanted to find ways to make sure it is still relevant in the here and now," adding that the campaign starts digitally, but will migrate to TV on May 6. Of the creative, shot in South Africa, he says that even though the images vary, "Everything you see is through the eyes of a caring mother. We tried to do that with all of the campaign's assets."

The New Brunswick, N.J.-based pharma giant has also created a free mobile app via digital firm R/GA called "Donate a Photo" that turns photo sharing into a way to contribute to different causes.

For every photo shared or liked, the company gives a dollar. The effort involves either taking or selecting a photo using the app, choosing a cause, and then sharing it. Each photo represents a phrase indicating what the contribution will help accomplish. In addition to being shareable on Twitter and Facebook, they are also in a gallery at donateaphoto.com.

It's a good bet that the company needs the efforts as much for internal morale as external brand support after a string of pharmaceutical-product lawsuits, recalls and some hefty fines last spring over anti-psychotic Risperdal, made by subsidiary Janssen.