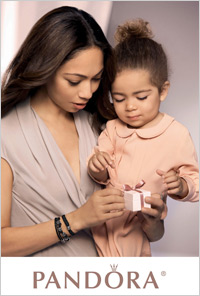 In an effort to make sure it gets as much of the $18.6 billion Mother’s Day gift frenzy as possible, jeweler Pandora is piling on the charm. First, in addition to its usual promotional gift sets and personalization options, the Danish company is celebrating mom with a limited-edition "Bear My Heart" charm. The sterling silver bear -- priced at $75 -- is clutching a 14-karat gold heart, and packaged in a pink heart-shaped box.

And lest anyone think teddy bears are just for sissies, the company is tapping into football fever as well. During last week’s NFL Draft, the company kicked off an online video campaign, showing six top-level draft prospects surprising their moms with gifts from Pandora.  It estimates some 22 million men followed the draft online, and the pre-roll videos of Barkevious Mingo, Geno Smith, Tyler Eifert, Sheldon Richardson, Eric Fisher and Luke Joeckel handing the gifts off to their mom are scheduled to continue appearing on the ESPN, Fox Sports and CBS Sports Web sites through Friday, May 3.

Pandora’s agency is GKV, based in Baltimore.

Brand Keys estimates that total Mother’s Day spending is set to rise 5% this year, to an average of $171 per celebrant, or $18.6 billion. And with more than 90% of consumers observing the day somehow, it expects 38% of those shopping to buy mom jewelry.

But the year’s big winners, it forecasts, will be traditional favorites: Cards, brunch or dinner, flowers, and clothing.