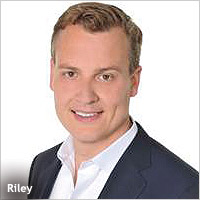 Shazam, maker of the eponymous music discovery app, on Monday announced former Yahoo executive Rich Riley as its new chief executive, a step toward an eventual IPO. John Fisher, the company’s CEO since 2005, has been named to the newly created position of executive chairman.

With Rich running the business, Fisher said he would focus on the company’s “corporate development and future strategy, including our ambitions to deliver a successful IPO for our shareholders as we look to become an increasingly important part of people’s everyday lives,” said Fisher, in a statement.

London-based Shazam says it has 300 million users in 200 countries, including 90 million in the U.S. With 60 million monthly active users, its popular app for identifying songs generates $300 million in annual sales through affiliate partnerships with iTunes and Amazon.

Building on the success of its audio-recognition app, the company in 2011 extended the service to television, allowing viewers to tag TV shows, live events and commercials to access extra content and features. As of last year, programming across more than 160 channels is now “Shazamable,” and more than 10 million people in the U.S. have used the app as a second-screen tool.

Last week, the company expanded its scope to movie theaters through a deal with in-cinema advertising network Screenvision. It will allow patrons to use their smartphones to tag pre-show ads to get more information and special offers in connection with advertised products and services.

For Riley, who was most recently executive vice president, Americas at Yahoo during a 13-year tenure with the Web giant, the move to Shazam marks his first stint as a CEO. Along with Daniel Danker, recently hired from the BBC as chief product officer, Riley is tasked with revving up the company’s growth as it pursues “new market opportunities.”

“I look forward to extending our dominance in media engagement, from our roots in music to our leadership position in second-screen TV ... stated Riley.

Prior to joining Yahoo, Riley was co-founder and managing member of Internet startup Log-Me-On, whose technology was acquired by Yahoo in 1999 and became what is now the Yahoo Toolbar. He previously worked as a financial analyst at Donaldson, Lufkin & Jenrette.

Also, Shazam board chairman John Pearson will become a nonexecutive director and remain on the board. The company has raised $32 million to date from investors, including Kleiner Perkins Caufield & Byers, Institutional Venture Partners and Acacia Partners.

Shazam did not indicate any timetable for when it might file for an IPO.