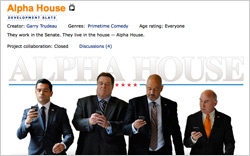 At first glance, the temptation was to say “calm down, Donny.” Netflix or Amazon may produce some original hits, but upend the traditional TV production model?

The advertising mogul and TV commentator Donny Deutsch argued that point vigorously Friday on MSNBC’s “Morning Joe” in an appearance with the masterminds behind “Alpha House,” an Amazon political comedy. The original from writer Jonathan Alter and cartoonist Garry Trudeau started to come together last year when the two hooked up during the New Hampshire primary.

“You guys are on the front line of a revolution,” Deutsch said.

"It's over -- game over," Deutsch said with A-list talent “embracing” the Netflix/Amazon route.

“Welcome to the future, it’s here,” he offered up later.

Taking a step back, it’s tough to say Deutsch went overboard. Broadcast networks aren’t going anywhere and cable channels are producing some of the best dramas ever. But you get the feeling Netflix’s “House of Cards” will prove to be seminal in at least a notable evolution in the original content ecosystem.

Netflix CEO Reed Hastings indicated recently that the series has had a modest impact on subscriber growth, but it’s been a media fascination and the buzz has been off the charts. (For that matter, it could be analagous to “Morning Joe,” where viewership isn’t large, except among influencers.)

Starring Kevin Spacey, "House of Cards" might be a validation that a company built on sending DVDs out by mail can produce HBO-type TV. Who knows? "Alpha House" might give similar ballast to one rooted in taking online orders for books.

More broadly, however, both could play a role in assuring that subscription video-on-demand (SVOD) will indeed have a huge impact on the future of original content creation and distribution.

The Netflix model has it releasing all episodes of a series at once, conducive to the binge-viewing that is driving much of the SVOD consumption. Netflix has produced other originals and has an “Arrested Development” revival coming soon.

Amazon is behind. “Alpha House” is one of eight pilots it is considering green-lighting, making them available free online and soliciting viewer opinions.

On MSNBC, Alter was as bullish as Deutsch about SVOD’s transformative potential. Of course, he's biased.

Certainly, the investment made by Netflix and Amazon has begun to shift the conversation about TV produced for digital streaming. (Hulu sometimes gets less attention, but also must be considered.)

There have been attempts by all sorts to turn short-form series into breakout hits. Plenty of producers will argue success, but name one?

“A year ago, people would have said it’s Webisodes,” Trudeau said of “Alpha House.” “It’s Web TV -- forget it. But now there is this perception that content can be made anywhere. Obviously, the provider has to have deep enough pockets, but TV shows are now seen as kind of the new novel. Anyone can make it. As long as it’s of a certain quality, people will go find it.”

Whether that means wide appeal, devoted niches or somewhere in between is unclear. Netflix's Hastings would probably be the best oracle.

Variety reports that Hulu, which has an original animated comedy with Eva Longoria coming, is aiming for between 1 million and 3 million viewers with its homegrown forays. That would be far from a broadcast hit or big cable success, but also wouldn't be “some crazy obscure thing,” acting Hulu CEO Andy Forssell told the publication.

Certainly, SVOD producers might accept an original series as a loss leader. If buzz leads to overall growth in site traffic and revenue, great.

Alter endorsed Amazon’s efforts to get people involved in the making of TV shows through "crowdsourcing" as opposed to "suits in Hollywood on the basis of focus groups deciding what everybody’s going to see on television."

It’s unclear, however, how much of Amazon's creative decision-making will be influenced by pilot viewers. Which brings up a potential irony: the more shows from SVOD operators become big money makers, the more likely it is that Netflix and Amazon executives will resemble those suits.