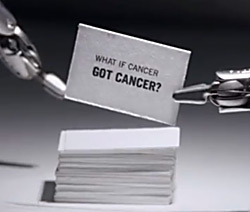 People come to New York City for a lot of reasons, most of them salubrious: you're a tourist, you just got a nice job, or your an admirably optimistic actor, dancer, comedian, or musician. There are some exceptions to the rule, and one is that you have an appointment at Sloan Kettering. The hospital is arguably the most renowned or second-most (maybe it competes with MD Anderson) cancer center in the world.

And that makes it hard for other cancer centers in the city -- much less centers near the city -- to get noticed for research and treatment. One-well known health center on Long Island, North Shore-LIJ Cancer Institute is trying to do just that with a marketing campaign whose central idea is that the hospital's cancer center is as relentless against cancer as the disease itself.

The theme of the ads, which show the institute's staff, surgeons, physicians, technicians and scientists, is that at the center, cancer becomes the prey: the ads ask questions like “What if Cancer Got Cancer?” and “What if Cancer Faced Overwhelming Odds?”

Dave Kwasnick, partner and creative director at Gatesman+Dave, says the campaign is a rebranding effort to create a single, differentiated voice for the hospital. "The institute's resources have been there but they haven't branded it under an umbrella," he says.

John Gatesman, president and CEO of the agency, tells Marketing Daily that one of the goals in the year-long creative development process was to avoid the idea that the patient is a passive victim. "We wanted to unseat that and talk about how the team-based approach [at LIJ] makes cancer the victim. Nobody was talking about seizing the initiative from cancer, or turning the tables on cancer. We wanted to create an uplifting message; a message of commitment and action that people who were helpless could gain that control."

Kwasnick says the agency looked outside the category for thematic ideas. "The armed forces, the Marines, hockey, football are committed to a goal. We liked that uplifting message of commitment and victory." He says the campaign is also designed to avoid a direct competitive comparison with the more famous New York City treatment institutes and create and set its own path.