Pennzoil: What Matters Is What You Put In It 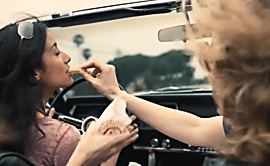 A lot of motor oil advertising could almost double for FloMax advertising: you get the anatomy lesson, the chemistry-for-dummys visuals, and the guys in the white jackets. At least in the pharma business, you actually see smiling people (post medication.)

Well, Pennzoil has decided to get out from under that hood to talk about relationships -- the one between owner and car. The campaign, via JWT's Atlanta office, hones in on the idea that regardless of what you do with your car, you should put the right stuff into it. The subtext is probably more important: your car has loved you for years; would it kill you to return the favor? Called "It Doesn’t Matter What You Do In Your Car, It Only Matters What You Put in It" centers on a :30-second TV ads showing all the things people do in their cars -- classic muscle cars, sedans, minivans, SUVs, off-roaders -- from hanging out, having dates, and parking at Lover's Leap to driving kids around town.

"When we looked at who we were and what we and our competitors were saying, everyone was talking very functional benefits," says Chris Hayek, director of global brand management for Shell Lubricants, of which Pennzoil is a division. "The challenge was how to break out from the competition. And emotion is a big part of that." He tells Marketing Daily that the creative approach allows the company to speak to a broad swath of people -- from enthusiast to soccer mom. "It's a very unifying theme about love, and love of cars, and that means something different for each [group]. It's not just outshouting the competition."

Perry Fair, CCO at JWT Atlanta, says the car and driver theme also allows for a lot more play on social media, since people are probably a lot more likely to want to talk to each other about their car (even if it's a beater) than oil viscosity and the virtues of synthetic molecules. "Traffic on our Web site has increased since we started on this, and I think social has a lot to do with it," he says, adding that print and digital elements reinforce the technical benefits of Pennzoil products. Pennzoil has 100,000 likes, give or take. "Our goal is to not only engage with consumers and grow, but also to do it with relevant information."

Fair says the campaign will include online contests on social media around peoples' car stories and why they love their vehicles. "Plus we are looking to create digital assets about people going out to find consumers who have done interesting things with their cars."

The refocus also means a slightly different media strategy, per Fair, who says there is less of a focus on strictly male-centric media -- racing, sports and the like -- and more on adults. "Now for network TV we are back on prime time, not just sports or power block TV. It's more the adult space."

There's also a lifestyle campaign around music via partnership with country star Tim McGraw. "We started looking at where could we be different and still connect to cars," says Hayek. In addition to having a presence at concerts, Pennzoil is running a promotion, "Four Wheels to Freedom," offering a McGraw-inspired customized 2013 Challenger SRT8.

ad campaign, automotive, events, music, partnership, promotion, sports, tv
2 comments about "Pennzoil: What Matters Is What You Put In It ".
Check to receive email when comments are posted.
Read more comments >
Next story loading