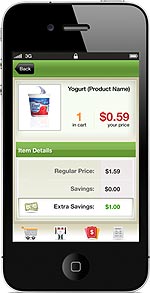 An increase in purchases for three new product launches translated into more than 16.6% for the food items, 6.6% for the beverage, and 7% for the household cleaning. The increases rose higher than Dynamic Logic's CPG industry benchmark for purchase intent of 1.1%, suggesting shoppers are 9.2 times on average more likely to consider purchasing the new products featured on Web sites like Coupons.com.

Coupons.com research conducted in March shows 59% of consumers in the pre-shopping mode when browsing online coupons plan to visit a grocery store within two days, and 43% plan to shop within the next 24 hours.

Some 51% of price-conscious consumers who rely on coupons admit to using them more today than they did five years ago, according to results of the Shopper Trend Report from RetailMeNot released last month. The company supports a coupon app for the iPhone with the ability for consumers to search and find digital coupons for nearby retailers in 500 shopping malls. The app also enables users to request geo-fencing for additional shopping areas.