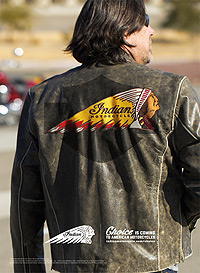 The easy part is the heritage: Indian is the first home-grown motorcycle brand in the U.S. (although there’s a debate involving a short-lived brand that started three years earlier), and has some street cred for racing, time trials, outlaw status, etc. That gives it some legitimate counterweight action versus the big-dog in American-made motorcycles. Although, given its size, it will only be nipping at Harley’s heels.

The first salvo in the reintroduction of the brand is a teaser campaign preceding this summer's launch of the first Indian motorcycles under Polaris' squireship. The campaign, “Choice,” via Minneapolis-based Colle+McVoy, doesn't actually mention Harley-Davidson, but certainly alludes to the Milwaukee behemoth, suggesting that Indian goes it one better for American authenticity, and that un-real riders need not apply.

Print ads are bifurcated with one side (the left side, in black and white meant to be, say, Harley) showing a bunch of guys in a parade of black bikes, "Black Sheep," the other, a guy on an Indian saying "Wolf." Another shows a very Harley-Davidson-esque motorcycle in a garage that also includes bicycles, a tennis racket, kayak and snowboard and what looks to be a Mercedes-Benz convertible, with "Hobby." The other side is a garage full of pretty much nothing but motorcycle gear and tools and an Indian motorcycle. "Passion" is the legend for that side.

"What's great about Indian -- and we don't enjoy this with [Polaris' other cruiser motorcycle brand] Victory is that there is a history and it has never died," says Rod Krois, director of marketing at the Medina, MN-based  company.

The company's 15-year-old Victory brand was initially positioned against Harley-Davidson, notes Krois. But, he adds, the company discovered that the brand was more suited to people shopping modern, high-tech touring bikes like Honda's Gold Wing.

"With Indian, we will have a real rivalry with Harley beyond what Victory could do," he says. "Indian will offer up the lifestyle, the idea that when you buy Indian you stand apart." Since the motorcycles haven't been released yet, the company has been putting a lot of attention on the engine, which was built from the ground up at Polaris' manufacturing hub in Osceola, Wisconsin where both Victory and Indian bikes are made. "We aren't sacrificing performance -- we will lead in that environment --  but we are drawing from the past in terms of classic design."

The company has been showing the engine at motorcycle show displays and will have an app that turns your smartphone into an Indian engine complete with vibration and sound.

That the campaign is global (though the major focus will be the U.S.) reflects Polari s' expansion strategy. Krois says a quarter of distribution points for Victory next year will be international. "We are building up Indian distribution, too, and focusing on North America, but it will be global as well." He says the goal in the U.S. is around 400 retail points. The company had 14 when Polaris acquired it.

Per Krois, the company is focusing on the retail experience as well, and while there won't be single line stores for Indian a la H-D, the company has spent a year developing a retail environment for multi-brand stores. "What we get with Indian is the chance to do it the way we want to out of the gate. So we worked on the retail experience for the last year and a half. If we can't get to that experience with a candidate we will think hard about asking them to put out the capital."