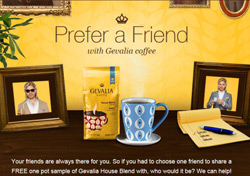 Continuing its full-on assault to gain share in the U.S. retail market, Kraft Foods’ Gevalia coffee is rolling out videos featuring spokesperson “Johan,” as well as a Facebook game app tied to a sampling opportunity.

The brand -- which recently released results of a national consumer survey finding that 59.7% of coffee drinkers preferred the taste of Gevalia House Blend over the taste of Starbucks House Blend -- is also airing a new TV spot featuring Johan touting (actually, “tooting”) those results to a woman in the coffee aisle of a grocery store. The taste test is also being promoted in print ads, among other media.

Previously available in the U.S. through online only, Gevalia began offering its top 10 varieties in U.S. grocery retailers nationwide in late 2011.

It ran its first Johan TV spot in February 2012, and that has been followed by a variety of efforts, including a pop-up sampling café in New York City's Times Square over the holidays, and a Facebook-based single-serve sampling promotion for Valentine's Day.

The new video push began in late April, with one in which Johan announces the taste-test results and explains that, while Gevalia is new to coffee aisles in the U.S., it has a 150-year heritage of excellence, and is Sweden’s #1 coffee.

That's being followed by a series of YouTube videos dubbed “Cup of Knowledge,” in which Johan offers bits of offbeat trivia before segueing into the point about more coffee drinkers preferring the taste of Gevalia’s house blend over Starbucks.

In the first video released May 7, for instance, he shares that pigeons can recognize people by their faces. Two more of these videos are scheduled to be released on May 17 and May 31.

On Facebook, Gevalia is offering a “Prefer a Friend” game app (meant to play off the “people prefer Gevalia” theme). Those who “like” the brand and play the game can submit their contact information to get a free one-pot sample of Gevalia.