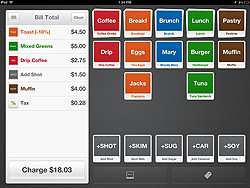 Groupon on Tuesday expanded its suite of mobile payment offerings for businesses with the rollout of the Breadcrumb POS app for the iPad. The new app allows a range of small businesses including retailers, quick-serve restaurants, salons and spas to accept credit card payments via an iPad-based point-of-sale system.

The daily deals company also rebranded its existing Breadcrumb app -- designed for restaurants, bars and cafes -- as “Breadcrumb Pro.” The main difference is that it provides a more extensive set of features for managing orders and payments and seating plans, as well as time sheets and payroll.

Standard hardware packages for the Breadcrumb POS system, dubbed “Breadbox," start at $246 for an iPad stand, cash drawer and card reader, and rise to $914 with the addition of a cash drawer, printer and Wi-Fi router. Businesses can purchase these and other items, including an iPad 2 or iPad Mini, on an a la carte basis online.

Breadcrumb Pro requires monthly plans that range from $99 for a one-iPad system up to $399 for 10 iPads. The plans do not include the cost of hardware.

The Breadcrumb payment service charges participating merchants a fee of 1.8% plus 15 cents per swiped Visa, Mastercard and Discover transaction. (That compares to PayPal’s 2.7% and Square’s 2.75% or $275 flat monthly rate.) It also typically charges 2.3% to 3.5 % and 15 cents for swiped American Express transactions.

To help lure businesses to Breadcrumb, Groupon is making fee processing free on the first $5,000 in credit card transactions through a promotional offer for new sign-ups. The company would like to get more of the 100,000 U.S. merchants that served daily deals through Groupon in the first quarter to add its point-of-sales services.

The company first introduced Breadcrumb last fall after acquiring the startup of the same name a year ago. Groupon also offers an app for iOS and Android called Groupon Merchant that allows businesses to use smartphones equipped with its dongle to handle card transactions.

During Groupon’s first-quarter conference call last week, interim CEO Eric Lefkofsky emphasized that the company’s efforts to build out POS and payments systems will take time to reach fruition. “You shouldn't expect them to have an impact on our performance next quarter. ... We think long-term that will be big business for us and they are all on track,” he said.